For the mission in GTA 1 associated with this vehicle, see Stallion (mission).

The Stallion is a recurring two-door coupe and convertible that has appeared in nine of the Grand Theft Auto games.

The Stallion was first featured in GTA 1, in which it appears as a hardtop design and is one of the faster cars on the road; however, it didn't appear again in the series until GTA III. In true muscle car fashion, it has V8 power channeled to the rear wheels.

In GTA III and GTA Liberty City Stories, a variant of the Stallion is featured in the game. Called Diablo Stallion, it is the primary gang car used by the Diablos. In GTA San Andreas, the regular Stallion is a gang car for the San Fierro Rifa.

A Stallion in GTA 1.

In GTA 1, the car resembles a 1968-1970 Pontiac GTO, but presumably takes its name from the Ford Mustang (see Stallion-Mustang comparison in #Trivia).

Between GTA III and GTA Vice City Stories, it appears to be based loosely on a 1964-68 Ford Mustang, mostly due its small size and name since there are no other remarkable similarities; but the grille loosely resembles a 1969/1970 Oldsmobile Cutlass (also the Oldsmobile 442) (creating a look similar to an Oldsmobile Omega), and the back bumper looks loosely based on those of 1970-1972 Cutlasses (but this is less obvious in the GTA SA rendition). The hood carries on the resemblance of the 1968-1970 Pontiac GTO. The prominent Oldsmobile cues give the Stallion a proto-Sabre-like design, until it was more accurately revised for the GTA IV version.

In GTA IV, the car is manufactured by Classique and resembles a much bigger muscle car rather than a pony car. The Stallion's headlight and taillight positions closely resemble a Plymouth Barracuda. It does also resemble the 1969-1973 Mustang due to the single headlight setup. The chassis is more like 1968-69 Oldsmobile Cutlasses but the sides bear the aggressive, heavily creased, lines of 1970-1972 Oldsmobile Cutlasses; the rear end looks like that of a 1971 or 1972 Cutlass (the "STALLION" marque is rendered above the bumper much like the "OLDSMOBILE" marque) with extra lights. The headlights are surrounded by headlight bezels similar to the ones on a 1968 Cutlass. Its engine is a 347ci (5.6 litre) V8. It is similar in appearance to the Clover from GTA San Andreas.

In GTA V, the car only appears in the enhanced version for PlayStation 4, Xbox One, and PC. The Stallion is now manufactured by Declasse; its physical appearance is otherwise unchanged from GTA IV.

Its handling varies in each game. In Grand Theft Auto III, the Stallion has reasonable acceleration, though its rear wheel drive layout and huge amount of low-down torque meant it was easy to perform professional-grade drifts around corners, doughnuts and wheel-spin when taking off. The GTA Vice City version is altogether slower than the GTA III rendition; however, its tail-happy traits remained. In GTA San Andreas, it handles much like the Clover and Sabre but fishtailing rarely occurs. The vehicle also appears in GTA Liberty City Stories and GTA Vice City Stories, where they have similar attributes to the GTA III and GTA Vice City renditions, respectively.

In GTA IV the Stallion is easier to steer, but it will occasionally spin out of control, especially in poor weather conditions such as rain. With good power, handling, and acceleration it is easily one of the top three muscle cars in Grand Theft Auto IV. Care should be taken through corners though; despite having good grip, the Stallion is awful at keeping flat through corners. The Stallion can also be quite bumpy on the road. Its top speed is 290 km/h (180 mph).

The GTA Chinatown Wars rendition adopts a combination of performance traits of previous renditions, with high top speed and acceleration and good steering, but very poor grip as a result of excess torque, resulting in the car skidding frequently, even in slight turns.

The Stallion in GTA San Andreas can be modified at a TransFender, which offers a wide range of parts for the car:

The Stallion has cameod multiple times in several non-GTA games, including those produced by other subsidiaries of Rockstar Games: 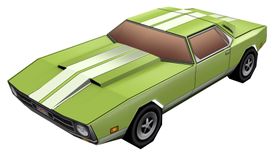 A rendering of the papercraft Stallion from the GTA Chinatown Wars section of the Rockstar Games Social Club.

Retrieved from ‘https://www.grandtheftwiki.com/index.php?title=Stallion&oldid=411651’
Categories:
Cookies help us deliver our services. By using our services, you agree to our use of cookies.