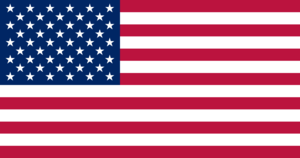 The flag of the United States of America

The United States of America is a country located in North America composed of 50 states in the Grand Theft Auto World in which the main Grand Theft Auto games take place. Most of the locations in the games are based on cities and states found in the actual USA. For example, Liberty City is based on the city of New York, Vice City is based on the city of Miami and the Keys located in South Florida, and the state of San Andreas is inspired by the actual states of California and Nevada, comprised of fictional cities based on real cities in those states.

Bullworth is a town in New England, and is where the game Bully takes place, apparently in the HD Universe. GTA IV contains references to Bully.

In all the games, the cities are always located on several islands connected by bridges. They appear to be isolated islands in the middle of the sea, but this is down to game limitations. Rockstar Games have stated that they avoid placing unreachable peices of land within the games to keep the complete feel to the game. There are multiple islands, and every game starts with certain bridges blocked, restricting the player from exploring the entire city at the start of the game. There is always a story as to why the bridges are shut, sometimes relative to the location of the game, for example; the bridges in Vice City are shut due to hurricane warnings, while in Liberty City they are blocked due to to terrorist threats against the city (HD Universe). These restrictions are lifted as the story progresses, with the earlier reason for them being closed having blown over.

Even though the Grand Theft Auto video games are made in the United Kingdom, specifically Edinburgh, Scotland, they are released first in the United States of America, and subsequently Canada followed by the UK and Europe. The games are primarily based on American popular culture, and nearly all have been set in fictitious (or copied) locations on the American mainland. The music, the clothes, the slang, and the abundance of vehicles in the game are considerably of American origin.

During the mission 'Practice Swing' in The Ballad of Gay Tony, Tony refers to Rocco as being under the age of consent in Utah, thus confirming the State of Utah's existence in the GTA universe.

New Austin, Nuevo Paraiso, and West Elizabeth, regions of Red Dead Redemption, are unknown to be in the same universe, as there are no references to indicate this, but nothing to contradict it either.

The writers of the game seem to have independent political beliefs, as they often parody liberals and conservatives in a negative light. Eight Grand Theft Auto titles are set during a Republican presidency (GTA III, Vice City, San Andreas, Vice City Stories, GTA IV, EFLC and GTA V), while four are under a Democratic presidency (GTA, Advance, Chinatown Wars and perhaps GTA 2).

Retrieved from ‘https://www.grandtheftwiki.com/index.php?title=United_States_of_America&oldid=399452’
Category:
Cookies help us deliver our services. By using our services, you agree to our use of cookies.