Jill Von Crastenburg was born on July 14th, into the multi-billionaire Von Crastenburg family, an old-money family of New England said to own half of The Exchange in Algonquin. "Von" suggests they may have been German nobility hundreds of years ago, as does their current prestige and influence.

She is the best friend of Cloe Parker, a parody of Nicole Richie's (Jill's counterpart) friendship with Paris Hilton (Cloe's). It is notable that although Hilton and Richie were born less than a year apart, Cloe is anywhere from 5 to 11 years Jill's senior.

Since her 11th birthday and/or 2006, she has been internationally famous for her extreme wealth and presence on the Liberty City party circuit. When she was 12, she was sent to 15 expensive private schools at the same time. She is frequently hounded by paparazzi - the most outlandish examples include her being told to re-enact a tantrum because cameramen were not at the scene, and media attention for her doing the most mundane activities (buying a carton of milk in a Downtown Los Santos supermarket and walking down the street in San Fierro.)

In early 2008, she began a three-week relationship with Cuban baseball player Ernesto Asaltacunas. At the beginning of GTA IV she left him for a new boyfriend, and a sex tape was released of her cheating on him by giving oral sex to an Opium Nights valet, as her boyfriend paid the bar tab in the very next room. The tape quickly circulated on Electric Tit but was removed from the site.

Assuming she were 13, she is likely a caricature of modern children (especially wealthy) growing up too fast. The scenario is also likely meant to poke fun at the unhealthy sexual images of Lindsay Lohan, Hillary Duff, Miley Cyrus and the Olsen Twins (who Jill bears a resemblance to) while they were still under 18. Pedophilia is portrayed in the game as being all too common in society. 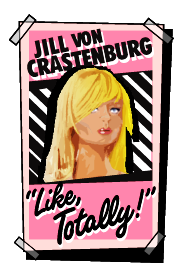 A poster of Jill Von Crastenburg.

The family own many large homes. Their official residence (though it is said to be a summer home) is a 19-bedroom mansion along in Westdyke, Alderney. It is on Owl Creek Ave, next door to Jill's best friend Cloe Parker. Jill's own bedroom features murals of erotic fairy tales (i.e. "Robin Hood taking it in the can from the big bad wolf") painted by celebrity artists Simon & Nigel, and she owns a flying rabbit as a pet. The family also owns a 63-room manor upstate and an enormous penthouse along Columbus Avenue in the Middle Park East area of Algonquin. They own several private jets, one with its own health spa and screening room. The family also gives over $300 million per month to charities that they own and operate. Despite amassing one of the largest fortunes in the world, the Von Crastenburgs do not pay taxes by claiming to practice their religion inside their house, according to I'm Rich.

Jill herself is a well-paid spokeswoman, recieving a free Grotti sports car every christmas from the dealership and a lifetime supply of food from any Burger Shot outlet in the American North-East (excluding Alderney; the Freak State, which is weird because Jill lives in Alderney). Jill is also set to host a new reality TV show titled America's Sexiest Terrorist.

Retrieved from ‘https://www.grandtheftwiki.com/index.php?title=Jill_Von_Crastenburg&oldid=404720’
Categories:
Cookies help us deliver our services. By using our services, you agree to our use of cookies.