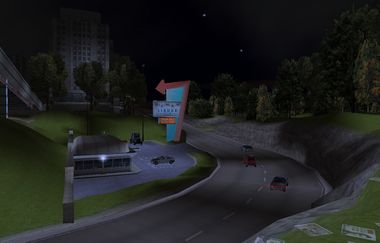 Callahan Point in GTA III, as viewed to the east.

Callahan Point is the southwesternmost district in Portland, distinguished by its underdeveloped state, although it does feature a large building at the northern edge, and notably houses the Portland end of the similar named Callahan Bridge, which is completed sometime between 1998 and 2001.

Callahan Point is repeatedly used in a number of missions.

In GTA III, Claude collects a vehicle with a Forelli Family gang member in the boot in the mission "Dead Skunk in the Trunk" and destroys the Triad processing plant in the mission "Blow Fish". He and Maria Latore also flee Portland from the district, heading to Staunton Island, in the mission "Last Requests".

In GTA Liberty City Stories, Toni Cipriani photographs Giovanni Casa, who is wearing an underwear in front of prostitutes, in the mission "Snappy Dresser" and then collects money from the burned-down Leone Family warehouse in the mission "The Trouble With Triads".

Retrieved from ‘https://www.grandtheftwiki.com/index.php?title=Callahan_Point&oldid=319640’
Category:
Cookies help us deliver our services. By using our services, you agree to our use of cookies.