Very little is known about Claude's background - he is mute, and possibly suffers from it as a speech disorder. Assuming he is at least 16 when he races in GTA San Andreas, he was born 1976 or earlier. In 1992, Claude had emerged as a top contender in an illegal racing ring (run by Wu Zi Mu) and owned an abandoned garage in Doherty, San Fierro. He became involved with Catalina, who had recently split up with Carl "CJ" Johnson, before racing CJ in a losing effort. Following the loss, he hands over the pink slip to his black ZR-350 to CJ. When the two end up racing a second time, Claude loses again, and he hands over the deed his garage to Johnson before leaving San Andreas with Catalina. The two head to Liberty City, where Catalina allies herself with the Colombian Cartel. Afterwards, they depart to engage in a series of robberies across the USA, most of their time was spent around Texas and New Mexico. In October 2001, Claude and Catalina return to Liberty City.[2]

Claude and Catalina arrive in Liberty City in October 2001 and immediately robbed a bank. Catalina, however, turns on her boyfriend, shooting him and leaving him for dead, explaining that he is 'small time'. Claude is later arrested by the Liberty City Police Department. He is convicted of all charges and is sentenced to ten years in prison. While being transferred to Liberty State Penitentiary in Portland, Claude escapes from a police convoy after the Colombian Cartel attack the convoy to free the Old Oriental Gentleman. Claude and 8-Ball escape to a safehouse in the Red Light District, before moving on to Sex Club Seven. Luigi Goterelli, the owner, gives Claude his first job in the city, to drive Misty from the hospital back to the club.

Claude, successful in his errand, continues to be employed by Goterelli, who also has him kill a drug dealer and two pimps, before having him drive Misty to Joey Leone's garage. Claude then begins to work for Joey, killing both Mike Forelli and Lee Chong, before chauffering Toni Cipriani, later working for him against the Triads. Claude, impressing the Leone Family hierarchy, is introduced to the Don, Salvatore Leone. Salvatore, 'seeing nothing but bright things' for Claude, has him look after his wife Maria for an evening, kill Curly Bob (who was selling secrets to the Colombian Cartel, now led by Catalina) and later destroy a freighter used as a factory for the drug SPANK. During this time, Claude also works for El Burro, the leader of the Diablos, helping him on various tasks, and Marty Chonks in his attempts to get out of his various problems.

After destroying the Cartel freighter, a paranoid Salvatore attempts to kill Claude by having him enter a bomb-laden car. Salvatore's wife Maria, however, phones Claude and directs him to a small pier where the two meet Asuka Kasen, co-leader of the Yakuza, and flee to Staunton Island after Maria had told her husband that she was dating Claude. Asuka, unconvinced of Claude's loyalty, has him kill Salvatore Leone to prove himself, before having him kill a number of other people causing her problems. She later introduces him to her brother Kenji and Ray Machowski, a corrupt police man working for the Yakuza. Claude helps Kenji with his problems, including settling debts and freeing a man from prison, and helps Machowski in his attempts to remain unnoticed, eventually helping him flee the city by the airport.

Claude continues to look for work and finds employment with King Courtney, who has him attack the Diablos before attempting to kill him on orders from Catalina, and Donald Love, who has him kill Kenji Kasen disguised as a Colombian Cartel gangster, to provoke a war. Asuka, unaware of Claude's role in her brother's death, launches an assault on a Cartel-controlled building site and begins to torture Miguel, Catalina's right hand man, into giving away Cartel secrets. Armed with the information, Asuka sends Claude on various missions to hurt Cartel operations, including stopping the selling of and stealing a shipment of SPANK.

During this period, Claude briefly finds employment with D-Ice, leader of the Red Jacks sub-sect of the Southside Hoods, and attacks the rival Purple Nines into defeat. After this, Claude returns to the building site and finds both Asuka and Miguel dead, while a ransom note for Maria is left for him. Claude goes to the Cartel mansion, escapes an ambush, destroys a helicopter piloted by Catalina (killing her) and rescues Maria. As he and Maria walk offscreen, a shot is fired, and the fate of the two is left ambiguous.[3]

Claude is a laid-back man that appears almost emotionless regardless of the situation. Provided he is paid for his services, he will take orders from his bosses without restraint or question, and usually gives a nod or two to show that he understands; even when he is getting scolded or shouted at by his bosses for doing something wrong or when things don't pan out well for them. He also bows respectfully to his bosses if required (as in Kenji Kasen's case when Kenji bows respectfully to Claude). He never speaks, and will only make a slight grunt when he is hurt, or an "Ugh!" whenever he is killed. He also seemingly is willing to kill whenever necessary, as he kills Kenji Kasen (a former boss) on the orders of Donald Love, and possibly kills Maria for talking too much. Claude will not hesitate to kill his former employers if necessary, or if given orders by another employer, as shown when he kills Kenji and Salvatore Leone under orders from Donald Love and Asuka Kasen respectively.

Claude remains true to his mission of finding (despite this being a total coincidence) and taking revenge on Catalina for leaving him for dead, and will be ready to fight even the Army in order to accomplish his goals, even showing the slightest bit of pity for Maria when he allows her to live after saving her. 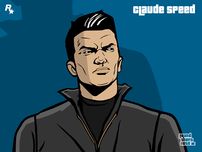 Artwork of "Claude Speed" from the "Which GTA Character Are You" quiz page on Facebook.

Rockstar has never confirmed or denied that the two are the same person: in response to a query posted by a fan, an official spokesperson said:

"Probably. It seems very likely but it’s also possible that there are just a lot of angry silent car thieves called Claude out there."[4]

Rockstar created an official Facebook quiz called "What Grand Theft Auto character are you?", in which by answering sixteen questions, the user would be given a character from the GTA series that fitted their personality. Certain combinations of answers would result in the answer Claude Speed with the artwork of GTA III's Claude, suggesting that either Claude Speed was merged with Claude, or that the two characters are exactly the same character, while also suggesting that this could be an official confirmation of them being the same characters. However, the accompanying description makes no reference to GTA 2.[5]

It would be worth noting that if both Claudes were the same character, it would prove one of the following:

Retrieved from ‘https://www.grandtheftwiki.com/index.php?title=Claude&oldid=417766’
Categories:
Cookies help us deliver our services. By using our services, you agree to our use of cookies.