Rusty Brown's was first mentioned in an advertisement on Flash FM and Fever 105. True to Rockstar's humor, people in the ad have very sexually suggestive opinions of their donuts (i.e. "I like to lick lovingly around the outside and then thrust my tongue in the middle."; "I just love the batter. All over my face.") Toni, Flash's DJ, dedicates Wang Chung's "Dance Hall Days" to the shop. 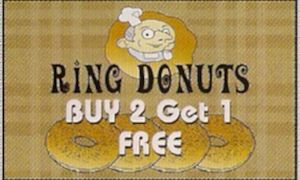 An advertisement seen in the GTA San Andreas manual. Despite lacking the "Rusty Brown" name, the logo matches those used later in the series.

Rusty Brown's has no physical presence as a business outlet in GTA San Andreas. However, examination of internal files suggests that the brand name was to be used for a cut chain of donut stores around San Andreas.

A shared interior of the outlet, which is featured in cutscenes in early missions with Frank Tenpenny, exists but is only accessible via the Hidden Interiors Universe. In addition, textures and models for donuts on trays (in a similar fashion as fastfood trays for Cluckin' Bell, Burger Shot and Well Stacked Pizza) also exist in internal files.

Similar donut shops, including Jim's Sticky Ring and Tuff Nut Donuts, exist in the final version of the game's setting.

Rusty Brown's appears in GTA Liberty City Stories as a diner at Callahan Point, Portland, Liberty City (circa 1998) where Greasy Joe's Café should be in Grand Theft Auto III (circa 2001). A Police Car and a Mule can be found in the parking lot.

It is also likely to be Liberty City Bikers turf, as referenced in a mission where Toni has to find a cure for the overdosed Maria Latore, who thinks she left the cure, which was called "zap", near there. They find no zap there, and they also find the enraged biker gang, because Toni and Maria were behind the killing of their leader, Cedric "Wayne" Fotheringay. The bikers then give chase to the pair.

The business is over 50 years old. It has expanded into the Internet, selling donuts online, and recently opened the franchise in East Asia. Its main site is at www.rustybrownsringdonuts.com. Rusty Brown's has a theme for the cell phone at www.vipluxuryringtones.com. The company proudly sponsors the LCPD.

In GTA Chinatown Wars, each Unique Stunt Jump involves crashing your car through a Rusty Brown's billboard. There are 30 spread throughout Liberty City.

Rusty Brown's Ring Donuts appears as a small kiosk in all of the 24/7 stores throughout Southern San Andreas, with donuts pre-made in a heated cart.

Retrieved from ‘https://www.grandtheftwiki.com/index.php?title=Rusty_Brown%27s_Ring_Donuts&oldid=416721’
Categories:
Cookies help us deliver our services. By using our services, you agree to our use of cookies.