Charge Island in GTA IV, as viewed to the southwest.

Based on Ward's and Randall's Island, Charge Island is officially part of the borough of Dukes in the Humboldt River, lying between Algonquin to the west, Dukes to the east, and Bohan to the north. The size of the island is roughly on par to that of Colony Island further south.

Charge Island is almost entirely dedicated to industrial activity, the enormous East Borough Bridge and water treatment facility (also suggested to be a desalination plant) make it decidedly unappealing for residential development; in addition to the abovementioned bridge foundations and water works, the island features a boathouse and cargo dock to the northwest, a fuel repository to the east (with an oil tanker docked there at the time of Grand Theft Auto IV), and a baseball field to the northeast that is identical to the one in Meadows Park (The island's baseball field might be based off Icahn Stadium).

A little forest with a creek is also present in the west part of the island; the small creek is similar to the Little Hell Gate in the middle of the island, while the unnamed channel to the east is comparable to Hell Gate in Astoria. The shorter channel on the northern tip of the island is presumably based of Bronx Kill, although Bronx Kill is much narrower in reality. 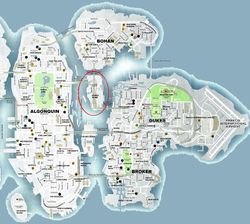 Charge Island's position in relation to Liberty City's other islands.

The Charge Island desalination plant is also the primary location of Grand Theft Auto: Chinatown Wars's climatic mission ("Salt in the Wound"), where Huang Lee pursues his uncle Wu Lee through the plant while being aided by Wade Heston.

In GTA IV, a parking lot in Charge Island is one of Little Jacob's gun car spawn points.

Retrieved from ‘https://www.grandtheftwiki.com/index.php?title=Charge_Island&oldid=368557’
Categories:
Cookies help us deliver our services. By using our services, you agree to our use of cookies.