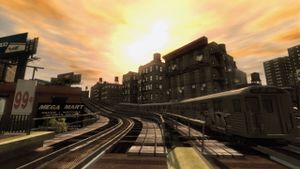 An elevated train passes between tenement buildings in Bohan.

Bohan is one of the five boroughs in the Grand Theft Auto IV version of Liberty City. It's the smallest major island in GTA IV, only containing seven of the city's sixty-five individual neighborhoods with only four accessible businesses, with an estimated population of 1,045,463, the borough to have the lowest poulation in Liberty City. Its real-life archetype is The Bronx. Bohan is located in the north-east of Liberty City. Bohan is unlocked from the beginning of the GTA IV story line.

According to the in-game Public Broadcasting documentary, Bohan is a Dutch word meaning "Dutch word" (although this is untrue. The real Dutch word for "Dutch word" is "Nederlands woord"). Most Bohan avenues are named after major prisons, Alcatraz Avenue, Rykers Avenue, Sing Sing Avenue, San Quentin Avenue, and Guantanamo Avenue being five examples, while others are named after breakdancing moves, such as Worm Street, Spin Street, Applejack Street and Valdez Street. South Bohan is also advertised in the game as the birth place of hip-hop.

Bohan is the most deprived of the five boroughs in Liberty City. It mainly consists of run-down housing projects and derelict squalor housing. South Bohan and Fortside are the best examples of this type of location. Whilst there is often evidence of gentrification in other deprived districts across Liberty City there is very little evidence of it in these neighborhoods. There is a strong gang presence in these two districts, with South Bohan and Fortside being Spanish Lords' primary turf.

Chase Point and Bohan Industrial generally consist of abandoned warehouses and archaic docking facilities, serving as Bohan's declining industrial districts. Prostitution is very common in these districts, far more so than anywhere else in Liberty City. Street prostitutes can be found congregating on many street corners during the nightime. Also, at night, muggers and street thugs will roam freely. Luis Lopez warns Arnaud, after he is mugged, that things can often get rough, and he shouldn't wander around alone.

The police rarely give a concern for any of the crime, noted when Niko Bellic is able to enter a warehouse and kill a gang of drug dealers, all without any police trouble for Manny Ecsuela, who was making a documentary about the crime and corruption of the borough. Manny's camera man comments after Niko kills the gang: "More senseless death, and the police aren't even here yet...".

Northern Gardens is a slightly less deprived area with considerable green space and a beach in its northern limits. It provides Bohan's Policing and Medical Services. The major function of the neighborhood is its housing of the Northern Gardens Projects which is one of Liberty City's largest housing estates. The projects' main complex shows signs of gentrification with the presence of small convenience shops and comparatively modern housing facilities. The police station is directly connected to Northern Gardens Projects by means of a short staircase, presumably to allow for an improved police presence and more effective response to crime.

Boulevard is Bohan's largest district and contains considerable parkland, green space and a beach in its northern limits. Boulevard is the safest and least deprived of the seven districts. The areas to the south of the district are more urban in character and are focused around the Grand Boulevard thoroughfare.

Little Bay is in the east of Bohan and is the borough's smallest locale. It contains low-rise apartment housing and could be considered one of the borough's safer and less deprived areas.

The population of Bohan are mainly of a Spanish nationality; this population trend is particularly concentrated around Puerto Rican South Bohan and Dominican Fortside. Other ethnic enclaves include the predominant African-American demographic of Northern Gardens and an Albanian presence in Little Bay.

Bohan's narrow-winding streets and frequent traffic jams caused by heavy traffic makes it more difficult to drive around than the other boroughs.

Stunt Jumps in Bohan, GTA IV.
Retrieved from ‘https://www.grandtheftwiki.com/index.php?title=Bohan&oldid=370376’
Categories:
Cookies help us deliver our services. By using our services, you agree to our use of cookies.