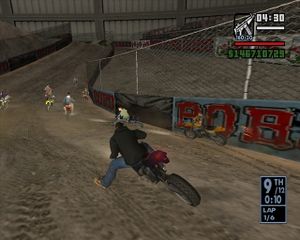 Dirt Track is a racing side mission in Grand Theft Auto: San Andreas, one of the two events held at Blackfield Stadium in Blackfield, Las Venturas, and available only on Mondays and Wednesdays.

The event is, to put it simply, a six lap motorcross race on a Sanchez against 11 other contestants around a windy figure eight-like track. The challenge of the event lies simply on efficiently negotiating the track's many sharp corners, as well as avoiding being dismounted following a violent landing from a dirt mount jump; the better the player's biking skill, the easier the race will be for the player. Other competitors, on the other hand, may be skillful taking corners, but frequently fall off their bikes following the second jump in the track, giving the player opportunities to lead the pack.

The reward for completing the mission is $25,000 each time. In addition, the player is award with a BF Injection that spawns in front of the Blackfield Stadium's entrance once the player passes the side-mission the first time.