In all its appearances, the BF Injection generally resembles a slightly enlarged Meyers Manx. In GTA III, it possessed a generally exaggerated design, an open air occupant compartment, no doors, curvy shells and a large rear-mounted engine, making the vehicle particularly distinctive. Despite the rear-mounted engine, when the vehicle is damaged enough in GTA III and Vice City, it will still emit smoke or flames from the front, due to game limitations. It can be seen with a wide array of body color combinations encompassing the body and its trims. Despite emitting light beams from its front fenders, the GTA III rendition does not have headlamps. The GTA Vice City rendition received cosmetic improvements, such as the addition of front lights (its headlights are moved towards the center, and additional hi-beam lights are mounted on the roll bars), and improved detailing (including minor variations of the fittings) on the engine.

The BF Injection differs significantly in GTA San Andreas, where it has a slightly sleeker and more angular look, and a tighter, narrower rear end. The GTA San Andreas rendition may feature two-tone body colors, in addition to the the body-and-trim color schemes seen in the earlier games.

The Injection (the BF part of the name having been retconned as the car's manufacturer) returns in GTA V. It is no longer the Meyers Manx-based dune buggy, whose role has been taken over by the Bifta in the Beach Bum Update. It is now based off of the Volkswagen Beetle based Baja Bug.

In GTA III, the BF Injection's performance is generally above average. The vehicle fares well in speed, but cannot match the speed of sports cars. Handling is adequate, with a wide wheelbase and a light weight. Despite its off-roading design, the GTA III rendition features stiff suspension and a high center of gravity, leaving the vehicle prone to rollovers. In GTA Vice City, the BF Injection's suspension is improved for better off-road driving, but it may still flip forward and land on its roof.

While the GTA San Andreas rendition is largely similar in engine power, its redesigned form has a shorter wheelbase, increasing the risk of spinouts. The vehicle's low profile and bottom-heavy weight distribution, however, reduces the risk of rollovers. Its grippy MMT tyres also boost its off-road capabilities. 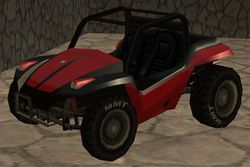 The black and red BF Injection.

In the mission Cut Throat Business (GTA San Andreas), a unique black and red BF injection is used to transport Carl Johnson and Madd Dogg to meet OG Loc. Because the player is unable to store this BF Injection in any garage during the mission (as it simply disappears after), it can only be acquired by killing Madd Dogg, thereby failing the mission, and taking the buggy to a safehouse garage. Its performance is no different to the standard BF Injection.

Retrieved from ‘https://www.grandtheftwiki.com/index.php?title=BF_Injection&oldid=413560’
Categories:
Cookies help us deliver our services. By using our services, you agree to our use of cookies.