In GTA Vice City, GTA Liberty City Stories and GTA Vice City Stories, the Sanchez assumes the design of an older dirtbike model, complete with a large round headlight. The GTA San Andreas and GTA IV renditions feature more modernized design cues, giving the bike a sportier appearance. The GTA San Andreas version mostly resembles the Yamaha DT series, while GTA IV's Sanchez is based on the Yamaha YZ450. This is also indicated by the "GP-450" sign at the back of the GTA IV rendition, which could hint the engine displacement being 450cc. In GTA IV, the Sanchez is manufactured by Maibatsu.

In most of its appearances, Sanchez's are common on urban as well as suburban street. In GTA San Andreas, however, the Sanchez is almost exclusively found in rural portions of San Andreas, reflecting its use in more rough terrain. The bike's go-anywhere reputation is also exploited in side-missions, ranging from checkpoint side-quests to stadium events and races.

The Sanchez, with its soft suspension, high ground clearance and very light weight is useful for stunt biking and offroad applications, but sacrifices speed (being slower than a PCJ-600). Though its performance remains unchanged in GTA IV (apart from its newer 4 stroke engine sound), it is still best suited for off-roading. Like all bikes in GTA IV's single player mode, the Sanchez must be driven with particular caution in traffic to avoid severe injury as the player may easily be dismounted. 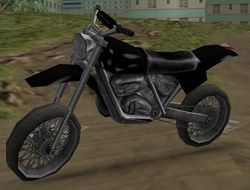 The black Sanchez found in the "Trial by Dirt" sub-mission.

In GTA Vice City three Black Sanchez dirt bikes appears in the side mission Trial By Dirt. While the player races around the dirt track with the Sanchez, three black Sanchez dirt bikes chase the player. Rather than guns, the Haitian riders wield Machetes, but are relatively easy to kill. These bikes appear around half way around the first lap, though obtaining one of these bikes is easy if the player waits on the spot upon beginning the mission. The player can then prepare for the arrival of the Haitians. The black Sanchez's speed and handling are the same as its normally-colored counterparts. A similar black Sanchez may also be found in a mission in the episodic content The Ballad of Gay Tony for Grand Theft Auto IV, as listed below.

The Manchez, featured in GTA Liberty City Stories, serves as an improved variant of the Sanchez with a rugged exterior and superior performance.

Retrieved from ‘https://www.grandtheftwiki.com/index.php?title=Sanchez&oldid=418336’
Categories:
Cookies help us deliver our services. By using our services, you agree to our use of cookies.