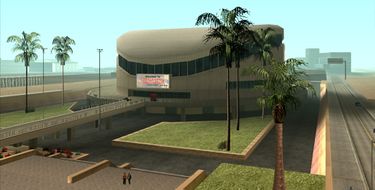 Blackfield Stadium and its immediate surrounding in GTA San Andreas.

Blackfield Stadium is a stadium in Grand Theft Auto: San Andreas, which serves as the primary arena for Las Venturas, San Andreas. It is located along Julius Thruway West, in the Blackfield district, hence the name. Near the stadium are Las Venturas Airport, the Bike School and Greenglass College. It is based on the Thomas & Mack Center. Blackfield Stadium is the location of two side missions, which involve riding a dirt bike, whether it be a checkpoint collection or a race. A Dune and a BF Injection would be rewarded once the side-missions have been completed.