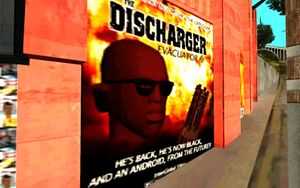 The Evacuator Trilogy is a trilogy of films in the 3D Universe and HD Universe made from 1984 to 1992, starring Jack Howitzer as Tim, a crazed ex-Marine who is recruited by the US Government periodically for various tasks such as search-and-rescue missions, and working undercover as a special ed teacher.

The first two films Evacuator (1984) and Exploder: Evacuator Part II (1986) mainly focus on Tim venturing to Vietnam and Cambodia for rescue purposes and to kill Communists. The third film Special Needs Cop (1992) features a far different story, with Tim flying out of Cambodia and back to the United States early in the film to teach a pre-school for handicapped children.

The trilogy parodies trigger-happy patriotic action movies of the 1980s with muscle-bound heroes, such as Rambo and Commando. It also comes with its own action figure play set, though many figures and props are "sold separately," also a play on the merchandising of G.I. Joe action figures of the time, or possibly even the short-lived Rambo toy line.

Retrieved from ‘https://www.grandtheftwiki.com/index.php?title=Evacuator_Trilogy&oldid=398501’
Category:
Cookies help us deliver our services. By using our services, you agree to our use of cookies.