Jack Howitzer's earliest known films, Loincloth, Evacuator and Push-Up, were released in 1984. He also appears on the radio that year in a commercial for Little Lacy Surprise and as an imaging voice on Emotion 98.3. In 1986 he appeared in the Evacuator sequel, titled Exploder: Evacuator Part II. In the next three years, he appeared in films titled Annihilator, and Zero Seconds to Death Time. Howitzer also frequently used Steroids during his film career, leading to many film critics and talk show hosts mocking the fact they had apparently shrunk his genitals.

By 1989 Howitzer's popularity had eventually declined and his career slowed down. He released Special Needs Cop in 1992, a severely politically incorrect film in which he endangers the lives of special needs children and other innocents. He also became delusional, believing that his movies were real and the Soviet Union could still attack (despite the fact they had collapsed in 1991). By this point Howitzer developed post traumatic stress syndrome from the battles and wars in his movies. In 1992, He was interviewed on WCTR's Entertaining America show where he accidentally and fatally shot host Billy Dexter (Jack thought that his gun wasn't loaded), also shooting at others on the scene. Jack was later put on trial for murder and faced the death penalty, although the outcome of the trial is not revealed. When interviewed by WCTR in a Los Santos prison awaiting trial, he admits to killing the original Ho Chi from the Exploder movies, also demanding his prison bitch act like her.

In The Ballad of Gay Tony, the Weazel News website reveals that Howitzer instead served 15 years in prison for shooting Dexter and starred his own reality TV show since his release. The show was failing, though, with low audience ratings.

In GTA V, Howitzer has a Lifeinvader profile. He was arrested in Los Santos, San Andreas in 2010 for an unspecified reason, and spent 3 years in Bolingbroke Penitentiary. Due to his deteriorating mental state, Jack took up ventriloquism with his puppet version of Ho Chi, speaking for it in a high-pitched broken English, and gaining a new agent Rufus Bellows while living in a dilapidated motel in Blaine County and hording jars of his own urine. He is frequently armed with an AK-47. 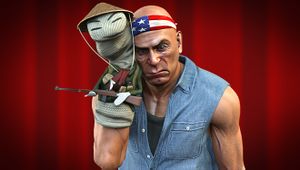 Jack Howitzer, circa 2013, with his Ho Chi sock puppet.
Retrieved from ‘https://www.grandtheftwiki.com/index.php?title=Jack_Howitzer&oldid=418682’
Categories: