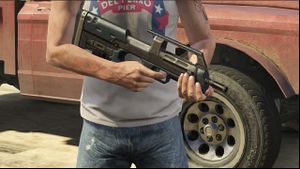 The Assault SMG as it appears in GTA V.

The Assault SMG is a submachine gun featured in the The Ballad of Gay Tony and Grand Theft Auto V.

Based on the Belgian FN P90 personal defense weapon, the Assault SMG is one of the first bullpup weapons offered in the GTA series. In real life, the P90 uses the proprietary 5.7x28mm cartridge; however, in-game, it shares its ammunition with other SMGs, similar to pistols sharing ammunition despite different cartridge sizes. It is outfitted with a functional suppressor as minimal muzzle flash is produced when the weapon is fired; however, it cannot be used for stealth attacks as firing the weapon out in the open attracts attention.

The Assualt SMG is no longer based on the P90; however the weapon retains a bullpup configuration. The weapon has a default 30 round magazine but can be extended to 60 rounds. Other upgrades available include a scope for improving accuracy, a flashlight to improve visibility in dark areas, and a suppressor for stealth purposes.

The Assault SMG has greater accuracy and a higher magazine capacity than the Standard SMG; however, it is more expensive, has less stopping power, and has a longer reload time. Unlike other SMGs, the Assault SMG cannot be used by the driver of a vehicle under normal circumstances (see #Trivia).

Despite its name, the Assault SMG doesn't fit very well for assault roles due to its low damage, but it should be used for longer distances where its high accuracy and capacity give it an edge over other SMGs or pistols, but remains outclassed by assault and sniper rifles.

File:AssaultSMG-Beta.jpg
The Beta version of the Assault SMG. Notice the lack of a suppressor.

Retrieved from ‘https://www.grandtheftwiki.com/index.php?title=Assault_SMG&oldid=398716’
Categories:
Cookies help us deliver our services. By using our services, you agree to our use of cookies.