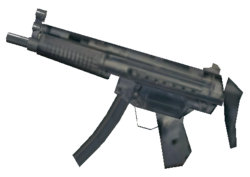 The MP5 in GTA Vice City.

The MP5 was developed in the 1960s by a group of engineers from the West German arms manufacturer Heckler & Koch GmbH (HK). The company, motivated by the success of the Heckler & Koch G3 rifle developed a group of small arms consisting of four types of firearms (all based on the G3 design layout), where the first type was chambered in 7.62 x 51 mm NATO, the second – using the 7.62 x 39 mm M43 round, third – the intermediate 5.56 x 45 mm NATO caliber and the fourth type – chambering the 9 x 19 mm Parabellum pistol cartridge. The MP5 (short for Maschinenpistole 5) was created within the fourth group of firearms, initially known as the HK54.

The MP5 is one of the most powerful submachine guns in the GTA series, with devastating effects to both the player and non-player targets alike, as well as dealing 35 points of damage per hit. It is arguably a better substitute for the Micro Uzi and Micro-SMG, holding a better rate of fire and more damage per round. However, like the Micro-SMG, the MP5 has the disadvantage of disallowing the player from discharging the weapon while running, allowing the player to only stand or stride while talking aim or shooting. Since its inception in GTA Vice City, the weapon is favored by the FBI (and GTA IV's FIB), Army (in GTA Vice City, Liberty City Stories, and Vice City Stories), and GTA IV's NOOSE tactical units as a weapon of choice. All renditions of the MP5 hold 30 rounds per magazine.

Each MP5 rendition has a variant in the GTA games. GTA Vice City features an MP5A3, GTA San Andreas features an HK94A3, and GTA Liberty City Stories features the MP5K which looks a little lengthier than the other renditions. In Vice City Stories, the SP89 (a civilian version of the MP5K which is an anachronism for 1984) makes an appearance, but the model is more like combined parts of the MP5A3, MP5K and MP5SD since it has the collapsible stock of the MP5A3, the shorter barrel and vertical foregrip of the MP5K, and the muzzle almost appears to be an attempt at an MP5SD suppressor. In GTA IV, the MP5A3 was scarpped and was turned into an MP10. In GTA Chinatown Wars the MP5 is again an MP5A3 and is called the SMG, just like any other rendition.

The SMG can be purchased at the back-alley gun shops for $2500 and each additional magazine costs $150. It can be purchased from Little Jacob for $1750 and each additional magazine will cost $20. It is basically the most used weapon on multiplayer and a good weapon for single player also. It is a 2 hit kill with headshots on single player and multiplayer. It has about double the range of an Uzi and almost the range of an AK, but not as much range as an M4. This weapon is good for drive bys and car chases as it has an high rate of fire and a 30 round magazine, but the Uzi is more suited for that purpose and this gun is more suited for attacking on the ground.

The SMG can be purchased at Ammu-Nation in Los Santos and Blaine County.

An early image of Niko holding an MP5.

One of the deal ambushers during the intro cutscene is wielding an MP5K, which isn't available to use in-game.

Retrieved from ‘https://www.grandtheftwiki.com/index.php?title=MP5&oldid=411171’
Categories:
Cookies help us deliver our services. By using our services, you agree to our use of cookies.