"Nothing says "I've made it in this town" a like a N.O.O.S.E armored personnel carrier, equipped with a 360-degree rotatable turret and explosive ordinance."
- Official website description.

The National Office Of Security Enforcement (NOOSE) is an high-end law enforcement organization in the HD Universe. In Grand Theft Auto IV, it fulfills the roles of both the Military and SWAT units seen in previous GTA games. In Grand Theft Auto V, although the Military has a presence in the game, they do not actively engage the player during a wanted level unless the player is within the perimeter of Fort Zancudo, leaving NOOSE as the highest level threat in normal situations.

NOOSE is called upon to assist the police when the player has a wanted level of at least 4 stars, before the FIB. Patriotism and Immigration Authority officers are largely similar to the LCPD's in behavior, weapons, appearance and mannerisms. Tactical Response officers, however, are designed to appear as fully equipped tactical squad units, with heavy armor and weaponry.

NOOSE's vehicle fleet consists of modified Police Cruisers, Patriots, Enforcers, Annihilators, and Armored Personnel Carriers. The NOOSE Cruisers and Patriots are exclusively driven by Patriotism and Immigration Authority officers, while the Enforcers and the APCs are used solely by the Tactical Response Unit. The Annihilator may appear with occupants from either division, depending on who is pursuing the player on the ground.

In multiplayer, NOOSE is the main rival force during Hangman's NOOSE, in which players must escort Kenny Petrovic from Francis International Airport to Charge Island.

NOOSE officers start to appear at wanted levels of 3 stars as air support in Police Mavericks. Police helicopters have two sharpshooters on board armed with Carbine Rifles, and shoot at the player and their getaway vehicle. At 4 stars, NOOSE officers start to assist the LSPD, Los Santos County, and Blaine County Sheriff's Departments on the ground. NOOSE comes 3 to a vehicle either in FIB SUVs if the player is within the Los Santos city limits or Sheriff SUVs if the player is in the remote areas of San Andreas. Additionally, 4 NOOSE officers can rappel from Police Mavericks to engage the player on the ground at 4 stars and above. 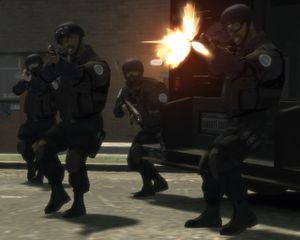 A four-man team from NOOSE's Tactical Response Unit in combat.

NOOSE are typically armed with Carbine Rifles, Pump Action Shotguns and SMGs. In The Ballad of Gay Tony, some NOOSE units are also armed with Assault SMGs and Automatic Shotguns. This weapon combination is very deadly; Carbine Rifles to take the player out at long range, Shotguns for short range and SMGs for medium range. If NOOSE agents have their weapons shot out of their hands, then they will pull out Pistols and continue to engage the player. NOOSE units are protected with Body Armor nearly doubling their endurance. In Grand Theft Auto: Chinatown Wars, NOOSE agents are equipped with Micro SMGs. In helicopters NOOSE units will fire on the player with Carbine Rifles. In The Ballad of Gay Tony however, they will use the Advanced MG instead. In The Ballad of Gay Tony missions Corner Kids and Not So Fast, they are also known to use Rocket Launchers. 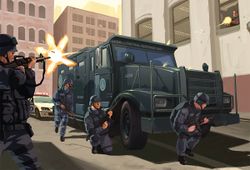 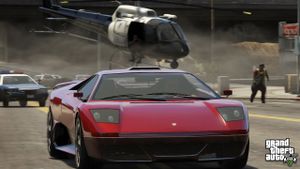 A NOOSE character model in a GTA V screenshot.
Retrieved from ‘https://www.grandtheftwiki.com/index.php?title=NOOSE&oldid=409482’
Categories:
Cookies help us deliver our services. By using our services, you agree to our use of cookies.