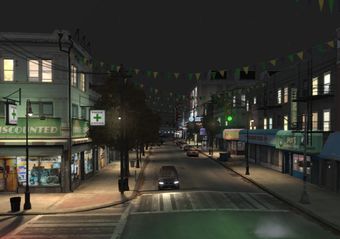 Saratoga Avenue, a primary street that cuts across commercial Willis, as viewed to the north.

Willis is a nine-block neighborhood in eastern Dukes, Liberty City, bordered by Tudor Street to the north (Meadows Park) and to the east (Francis International Airport); Seymour Avenue to the west (Meadow Hills); and Lynch Street to the south (Beechwood City).

Willis is primarily portrayed as a mixed-use middle-to-upper class area, residential in the west and commercial in the east; in the commercial district, businesses are dwarfed by the Big Willis Mall on the northeastern edge of the neighborhood at Saratoga Avenue and Carrollton Street. Saratoga Avenue serves as it's main street. As in Meadows Hills, the homes in western Willis bears traits of Tudor architecture. One half of Station Square, another shopping establishment, is also situated in Willis, directly north from the neighborhood's nearest station; the other half of the Square is located within Meadow Hills.

Willis boasts nothing particularly useful for players. Aside from the aforementioned train station, Willis only has a car wash (Willis Wash and Lube) located off the southern end of Saratoga Avenue. Willis is also accessible from the Algonquin-Dukes Expressway via Saratoga Avenue. Willis' proximity with Beechwood City also results in the district being part of the Hillside Posse's turf, as members of the gang, as well as their gang cars, may be spotted within the area.

Also there are two vehicles in which you have to do for Stevie's Car Thefts. These are the Dilettante which can be found on Carrollton Street, parked in front of the Canyon Megaplex, and the Freeway can be found parked outside the Willis Wash and Lube on Saratoga Avenue.

Willis is based on the Queens, New York neighborhood of Hollis.

Saratoga Avenue serves as it's primary street. The Liberty City Subway has a station in Station Square, with entrances at the Seymour Avenue-Savannah Avenue intersection (at the Meadow Hills border) and auxiliary entrances along Lynch Street.

Retrieved from ‘https://www.grandtheftwiki.com/index.php?title=Willis&oldid=356083’
Category:
Cookies help us deliver our services. By using our services, you agree to our use of cookies.