This article is about a motorcycle. For the roadway, see highways.

Resembling a classic Harley-Davidson motorcycle in all its incarnations, as is the basis for the Angel, the Freeway was originally designed to represent typical cruiser motorcycle.

In GTA IV, the Freeway sports a Western Motorcycle Company brand and conventional handlebars, distinguishing it from more radically designed choppers. The bike is also available with one or two-tone colors, two combination of carburetor cap and gas tank configurations (with one featuring a gas tank-mounted speedometer), two exhaust pipe configurations, and optional side panniers (saddlebags) at the rear. Unusually, the Episodes from Liberty City version of the Freeway in The Lost and Damned and The Ballad of Gay Tony is not available with saddlebags.

Freeways between GTA Vice City and GTA Vice City Stories feature fairly powerful engines; in GTA Vice City and GTA Liberty City Stories, the Freeway the third fastest motorcycle behind the PCJ-600 and Angel. However, its steering and braking are less responsive due to its heavier weight, resulting in the constant need for e-brake-aided turns around sharper corners. Due to its heavy weight, it is also unsuitable for stunts or off-roading, but its speed makes it suited for ordinary street-cruising.

The Freeway in GTA IV features similar performance traits from its previous incarnations, retaining an average top speed of 117 kph/73 mph and average acceleration, as well as fairly weak steering. Due to the bike's average grip, it also has a tendency to tailspin, making the bike less controllable when cornering. Its brakes, however, are fairly responsive. 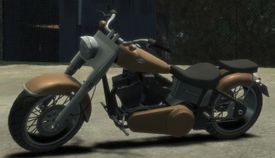 The requested Freeway in Stevie's Car Thefts in GTA IV.

In GTA IV, a Freeway is requested as part of Stevie's Car Thefts, appearing with a beige coloring. As a new Freeway will respawn at the same spot until the player delivers one to S&M Auto Sales, the player can save one at their safehouse before delivering another.

Retrieved from ‘https://www.grandtheftwiki.com/index.php?title=Freeway&oldid=376035’
Categories:
Cookies help us deliver our services. By using our services, you agree to our use of cookies.