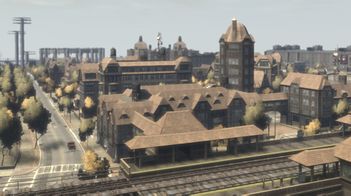 Meadow Hills, as viewed to the northeast. The Lynch Street station is visible in the foreground; buildings from west Willis, which also feature Meadow Hills' architecture of choice, are also seen in the background to the right.

Meadow Hills is Dukes' smallest, but most affluent neighborhood, with one of the most suburban atmospheres of all the Liberty City locales. The density of homes in Meadow Hills' increases from north to south, from single cottages and semi-detached homes to the north, to multi-storey apartments to the south. Meadow Hills' main shopping drag is in the southern part of the neighborhood, along the Savannah Avenue side of Station Square. It is a strong community of the Jewish Mafia.

The Liberty City Subway has a station in Station Square, the main entrance being at the Seymour Avenue-Savannah Avenue intersection (at the Willis border) and auxiliary entrances along Lynch Street.

Retrieved from ‘https://www.grandtheftwiki.com/index.php?title=Meadow_Hills&oldid=356046’
Category:
Cookies help us deliver our services. By using our services, you agree to our use of cookies.