The Angels of Death 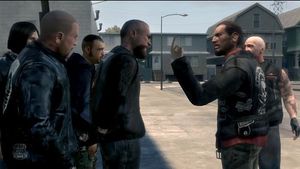 The Angels of Death Motorcycle Club is an outlaw biker gang operating around Algonquin, where they frequently hang out at their clubhouse located in Varsity Heights, Liberty City. The gang also has connections with the Spanish Lords as they are seen dealing Cocaine with them in the mission The Snow Storm. Unlike The Lost MC, who have an exclusive Liberty City charter, the Angels of Death have numerous charters including ones in the United Kingdom, Europe, Scandinavia, Canada and Australia as well as one in every state of America. The Angels of Death also have a theme park in Florida and sell branded merchandise such as bed linen, books, party sets, diapers and even dildos. For this, The Lost MC accuse them of selling out to what is true.

According to their official in-game website, angelsofdeathonline.com, the AOD started in San Andreas in 1949 as a small club for people unsatisfied with a non-segregated society. Lester Arnold is the leader of the Liberty City chapter of the Angels of Death and other high ranking Liberty City members are; Road Captain Joe Jon Johnson and senior member Albert Lawson.

In Grand Theft Auto IV, they are operating around Beechwood City, can be seen hanging out around the Burger Shot and the basketball court in Beechwood City, as well as BOABO.

The Lost Brotherhood are their main rivals. They play a major role in The Lost and Damned. The gang appears to be based on the Hells Angels MC.

Here follows a list of the turf the Angels of Death own and/or appear in.

GTA IV and The Ballad of Gay Tony

Gangs in the Grand Theft Auto series
Retrieved from ‘https://www.grandtheftwiki.com/index.php?title=The_Angels_of_Death&oldid=395977’
Categories:
Cookies help us deliver our services. By using our services, you agree to our use of cookies.