The Heat-Seeking Rocket Launcher is a handheld weapon in Grand Theft Auto: San Andreas. Unlike the Rocket Launcher, the Heat-seeking Rocket Launcher automatically selects the nearest available target. Strangely, when it's on the ground it resembles a Russian SA-7 Grail but when CJ picks it up it turns into an FIM-92A Stinger. When pointed at a vehicle the marker is green. After waiting for 3-5 seconds it turns red and the missile is locked on. 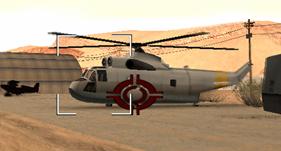 The Heat-Seeking Rocket Launcher locked on to a target.

Retrieved from ‘https://www.grandtheftwiki.com/index.php?title=Heat-Seeking_Rocket_Launcher&oldid=375396’
Categories:
Cookies help us deliver our services. By using our services, you agree to our use of cookies.