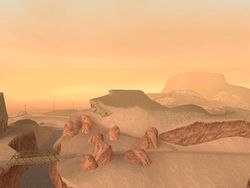 Tierra Robada from the sky.

Tierra Robada, which means Stolen Land in Spanish, is a semi-arid region of San Andreas in Grand Theft Auto: San Andreas. It is located in the very northwestern portion of the map, and is home to the towns of Bayside, and the marina, El Quebrados and Las Barrancas. It is physically separated from Bone County by the Sherman Dam and the Sherman Reservoir, with only a land bridge in the north connecting the two land masses. To the south of Tierra Robada is San Fierro.

Tierra Robada is partially based off parts of rural areas just outside the cities of Berkeley and Oakland. 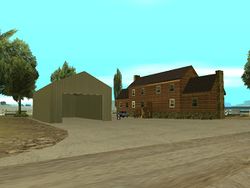 Grand Theft Auto: San Andreas
Retrieved from ‘https://www.grandtheftwiki.com/index.php?title=Tierra_Robada&oldid=364900’
Categories:
Cookies help us deliver our services. By using our services, you agree to our use of cookies.