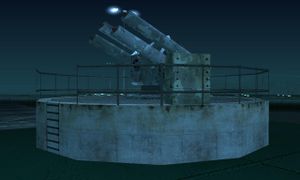 The Surface to Air Missile, or S.A.M., is an unmanned guided weapon system in Grand Theft Auto: San Andreas. Four sites are located around Area 69 and two are located in the Easter Basin Naval Station, both of which are no-fly zones.

If the player flies any aircraft, the jetpack, or the Vortex, near or over these zones, several heat-seeking missiles, which tracks the movement of the player's vehicle, will be launched. These missiles can severely damage the airplane's wings or engine (or the player, when using a jetpack), making it harder to fly. Depending on the durability and health of the player's vehicle, a few to some direct hits will destroy the vehicle and kill the player if they do not eject.

Destroying the S.A.M. sites and moving significantly far away from them will ause the sites to respawn in mint condition. All four S.A.M. sites in Area 69 will always fire heat-seeking missiles except in the case of temporary and voluntary disablement during the mission Black Project. However, both the other two S.A.M. sites in the Easter Basin Naval Station will remain disabled and will not fire at the player in any case except for temporary and voluntary functionalism during the mission Vertical Bird.

Like other heat-seeking missiles, the S.A.M. missiles can be deterred by using the Hydra's secondary fire, which launches flares.

Wikipedia has an article on:
Surface-to-Air Missile
Retrieved from ‘https://www.grandtheftwiki.com/index.php?title=Surface-to-Air_Missile&oldid=418112’
Categories:
Cookies help us deliver our services. By using our services, you agree to our use of cookies.