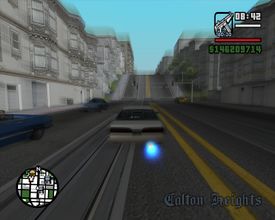 A nitrous-boosted Fortune in GTA San Andreas. Note the mounted nitrous tank in front of the car's rear windscreen.

Nitrous, short for nitrous oxide (N2O) and sometimes abbreviated as nitro, is used to boost the speed and acceleration of a vehicle in Grand Theft Auto: San Andreas and The Ballad of Gay Tony.

In GTA San Andreas, nitrous is a reusable vehicle component that can be installed on modifiable vehicles at any mod garages in San Andreas. Nitro comes in three "strengths", which include, in increasing order, 2x, shown with a small tank; 5x, with a large tank; and 10x, with a pair of small tanks. Increased nitrous strength provides a longer boosting duration.

When installed on a vehicle, the "fire" button can be pressed to activate a nitrous boost. The boost increases the speed and acceleration of the vehicle dramatically, with exaggerated motion blur and bright blue flames spewing out of the exhaust pipe(s), before the nitrous exhaust ceases after a given period of time and the vehicle may revert back to its normal top speed.

Each depletion of nitrous is followed by a delay period when the nitrous tank "refills" and the player will not be able to use another boost right away. Players will be able to identify this by keeping tabs at the exhaust pipe(s), which will emit blue fumes while the nitrous refills. When the fumes no longer appear (releasing normal exhaust smoke instead), the player is allowed to use the nitrous again. An exploit exists that allows players to regain use of nitrous faster by simply exiting the car that is refilling its nitrous tank and immediately reentering it, thereby resetting the status of the nitrous tank and refilling the nitrous instantaneously.

Players must be careful not to abuse the nitrous. Using nitrous near a police officer triggers a one-star wanted level. 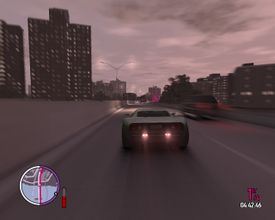 Boosting a Bullet GT with nitrous in a Triathlon in The Ballad of Gay Tony. Note the tank-shaped bar next to the radar.

In The Ballad of Gay Tony, nitrous is limited to use in Triathlons and multiplayer races, although the boost can be controlled. Motorcycles in Race and GTA Race multiplayer modes are also equipped with nitrous, but are often very risky to use as collisions while riding a nitrous-boosted bike are potentially fatal. Even vehicles like the APC may also be equipped with nitrous in such races.

Much like in Need for Speed and other similar games, a small tank-shaped bar next to the radar will show the amount of nitrous available, which will regenerate in time. When the nitrous amount reaches over the 45% mark, the player is ready to use the nitrous; in addition a high-pitched humming noise will be heard from the car, along with small orange fumes from the exhaust pipes. The player can continuously use the nitrous until it completely runs out, after which the player must wait until the bar refills to at least the aforementioned 45% to use the nitrous again. Unlike in GTA San Andreas, the nitrous in TBOGT can instantly catapult a vehicle to its top speed (or close to it), and the dramatic boost in speed may be shocking if the player's vehicle is traveling at a lower speed.

Nitrous boosts can also provide players a head start in races; this is accomplished by spinning the car's tires at the starting line (by holding the accelerator and brake/e-brake commands simultaneously), and activating the nitrous and releasing the brakes at the same time when the race starts. If done correctly, the car will attain a massive boost in speed that will easily propel it into the lead. This trick does not work in APC races.