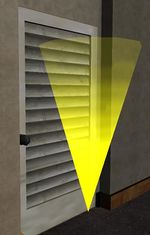 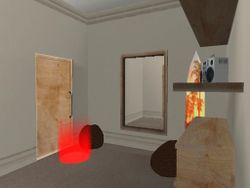 In GTA San Andreas, wardrobes are contained only within safehouses, and appear as a separate room with a yellow entrance icon (the same showing up on the exterior doors of accessible buildings). Upon entering the room, the player must walk into the red destination icon, which causes Carl Johnson to enter a walk-in closet. Once inside, clothing options will become available, including adding and removing items. The only clothing options available are the clothes Carl is wearing at the beginning of the game, any items the player purchases from clothing retailers, and special outfits the player unlocks as the story progresses. Changing clothes allows the player to evade a wanted level. Clothes can be changed back immediately afterward without reinstating the wanted level.

In the PC version, when the player is in the wardrobe, Alt+Tab-ing out and going back in-game, will make CJ's texture appear on the game screen. This may not happen with some computers.

In the console versions, killing yourself in the wardrobe will respawn you at the hospital in Los Santos, regardless of where your wardrobe is.

The wardrobe system in both GTA Liberty City Stories and GTA Vice City Stories are significantly simplified to support preset outfits. Wardrobes are typically identifiable by spinning clothing pickups (which design is carried over from GTA Vice City) situation in front of non-interactive closets; once the player is in contact of the pickup, they enter a clothes selection interface where they can cycle through the available outfits and select any of them to wear.

The wardrobe system in GTA IV is a direct decedent of the wardrobe systems implemented in GTA Liberty City Stories and GTA Vice City Stories. As opposed to simply cycling through preset attires, the wardrobe in GTA IV allows the player to cycle through available tops, pants, footwear, glasses and headgears (the left and right commands cycle through the available clothing within the category, while up or down commands cycle between clothing categories), before settling with any desired combination.

The wardrobe system in The Ballad of Gay Tony is more alike those in GTA Liberty City Stories and GTA Vice City Stories, only allowing the player to cycle between preset outfits.

In both GTA IV and The Ballad of Gay Tony, access to the wardrobe is identifiable by a yellow marker (similar used to represent contact points for missions) inside the safehouse, which will only be activated once the player stands in the marker and accepts to enter the wardrobe interface.

Retrieved from ‘https://www.grandtheftwiki.com/index.php?title=Wardrobe&oldid=370728’
Categories:
Cookies help us deliver our services. By using our services, you agree to our use of cookies.