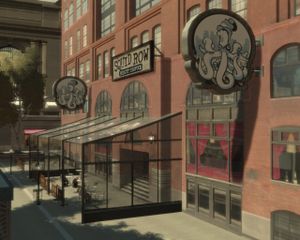 Squid Row is a chain of seafood restaurants featured in Grand Theft Auto IV and Grand Theft Auto: Chinatown Wars. With its name an obvious pun of "skid row", the restaurant is promoted as a budget restaurant, featuring in its logo a squid (against the background of a cityscape) wearing a torn hat and holding a bottle, a cigarette and a syringe. None of the restaurants are accessible to the player. The restaurant's slogan is "We're well worth the risk!", implying their produce carries a risk of food poisoning.

In The Ballad of Gay Tony, gay movie star Chris Hunt is known to be a big fan of the restaurant, and Daisie Cash-Cooze and Luis Lopez once chased Chris to one of the stores, only to find out that he already left.

Retrieved from ‘https://www.grandtheftwiki.com/index.php?title=Squid_Row&oldid=402803’
Categories:
Cookies help us deliver our services. By using our services, you agree to our use of cookies.