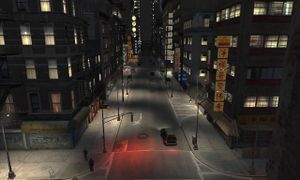 Bismarck Avenue is one of seven major north-south avenues in Algonquin, Liberty City. It is probably based on Park Avenue, being a two-laned street in its central run and stopping in front of the GetaLife Building, and continues after the Grand Easton Terminal. It stretchs for nineteen blocks, from East Holland in Uptown Algonquin down to The Exchange/Castle Gardens borders in Downtown Algonquin. It passes through the neighborhoods of East Holland, Lancaster, Middle Park East, Hatton Gardens, Lancet, Easton, Lower Easton, Chinatown and The Exchange. The street is not used in any mission, however, an NRG 900 can be stolen for Stevie's car thefts.