A Grand Theft Auto clone, also known as a GTA clone, is a term used by gamers and video game critics for a game that emulates, or has gameplay elements similar to the Grand Theft Auto series, following the success of Grand Theft Auto III in 2001. Specifically, a GTA clone is typically an action sandbox video game that usually contains a large free-roaming map that can be explored on foot or in a vehicle, with mission and side-missions displayed on a mini-map for the player.

The term also applies to games that, although it does not involve violence or wielding weapons, it still has elements similar or otherwise lifted from the GTA III Era, such as Wreckless: The Yakuza Missions (2002), Spider-Man 2 (2004), Tony Hawk's Underground (2003), Bratz: Rock Angelz (2005) (which one of the reviews even called "GTA for girls", and, coincidentally, uses the same RenderWare engine as the GTA III era), Bratz: Forever Diamondz (2006) and Jaws Unleashed (2006).

Some critics have extended the GTA Clone label to the Driver series, despite that series starting in 1999, two years before the release of Grand Theft Auto III. While GTA 2 was produced as a top-down perspective, Driver started as a 3D series. But since technology advances, GTA III could have been released as a 3D game without the influence of the Driver series. Some fans of Driver have called the GTA series a clone of Driver, even though the Driver series began focusing more on out-of-car action and on-foot action after the release of GTA III.

Open-world, 3D action-adventure games existed as a predominantly European genre for many years prior to the release of any similar game from DMA Design. Mercenary (1985) featured an open-world, non-linear quest in which the player could steal vehicles, shoot, and explore freely, including conflicts with the authorities. The Terminator, released in 1990, was a free-form, open-world game that set its action in a modern-day city that extended for miles, and included the ability to fire at civilians and steal cars. This game was also notable for being among the first American-developed games to feature these elements. Hunter continued the evolution into something more closely resembling the GTA series, with full 3D, third-person graphics and the ability to steal many different vehicle types.

DMA Design began pursuing open-world game design with the first Grand Theft Auto, which allowed players to commandeer various automobiles and shoot various weapons within a mission-based structure. Unlike later games in the series, and indeed many earlier influences, the first two GTA games were 2D. In 1998, DMA moved many of these design concepts into a 3D world, with Body Harvest. Grand Theft Auto III took the gameplay foundation of the first two Grand Theft Auto games and expanded it into a 3D world, and offered an unprecedented variety of minigames and side-missions. The title was a much greater commercial success than its direct precursors, and its influence was profound. As such, Grand Theft Auto III is credited with popularizing this genre, let alone inventing it. Its release is sometimes treated as a revolutionary event in the history of video games, much like the release of Doom nearly a decade earlier. GamePro called it the most important game of all time, and claimed that every genre was influenced to rethink their conventional level design.

Calling a game a "Grand Theft Auto clone" is sometimes considered unfair or insulting. This is because reviewers sometimes use this term to suggest that the "clone" is a mere imitation, designed for the sole purpose of capitalizing on the success of the Grand Theft Auto series. However, this term can also be used as a neutral description of a game, which can range from good to bad. Reviewers have used "Grand Theft Auto clone" to describe games that rest on their own merits, and do not necessarily dismiss the entire class of games as mere imitators.

Games of this type are sometimes defined under the broader terminology "open world games" or "sandbox games". However, many games that predate Grand Theft Auto III, such as Metroidfrom 1986, are also called open world games, while games like SimCity have been called "sandbox games." Conflictingly games such as Grand Theft Auto III and Body Harvest are credited with inventing this genre more than a decade later. Furthermore, reviewers have stated that this genre does not include every game with a freely explorable world and that this genre is much more specific, thus excluding the free-roaming titles Spider-Man 2 and The Incredible Hulk: Ultimate Destruction from this class of games. The terminology is inconsistent, sometimes including any game with open level design, while other times focusing on a specific genre created at the turn of the century.

Without clear classifications to describe the genre popularized by Grand Theft Auto, reviewers have created a number of alternate names for this genre. Some reviewers have focused on the pervasive criminal themes and content in the genre, using terminology such as "crime games", "crime-based action games", and "gangsta genre". Other journalists have emphasized gameplay by describing the genre as "free roaming action adventure games", "driving-and-shooting games", and "driving action hybrids".

As a result of such similarities, Rockstar has placed several Easter eggs to mock the competition.

In Grand Theft Auto III, Claude is tasked with a mission called "Two-Faced Tanner", where they must kill an undercover cop (that Asuka describes as "strangely animated"). This "Tanner" character is described as being "totally useless outside of his car", a reference to the uselessness of on-foot action in Driver 2. Rockstar even went as far as to give Tanner a female walking animation.

In Grand Theft Auto: Vice City, during the mission "Autocide", the targets that Tommy Vercetti must kill are subtle references to the main characters of Driver 2 (Dick Tanner, after Tanner), The Getaway (Marcus Hammond, Charlie Dilson and Franco Carter, after Mark Hammond, Charlie Jolson and Frank Carter), and True Crime: Streets of LA (Nick Kong, after Nick Kang Wilson). DRIV3R responded by including ten hidden enemies named "Timmy Vermicelli" (after Vice City protagonist Tommy Vercetti), who wore waterwings, since no one in the GTA series could swim before GTA: San Andreas. 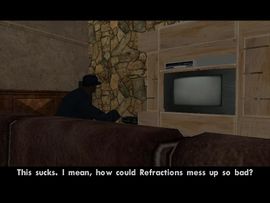 As a mockery of DRIV3R, GTA San Andreas included a mission where, while breaking into Madd Dogg's mansion, there is a man playing a video game and making fun of the way the main character walks (Tanner's walking animations were often criticized) and asking how "Refractions" (A spoof of Reflections Interactive, the designers of the Driver Series) could "mess up so bad".

Luxoflux, makers of True Crime: Streets of L.A., also responded by putting up billboards in their game mocking the Rockstar Games logo used to advertise jockstraps around Los Angeles, California. In response to the "Jockstrap" billboard, another San Andreas Easter egg mocks True Crime, which was depicted on several billboards in the city of Los Santos as "True Grime". This is also evident in the "TRUEGRIME" vehicle cheat code in San Andreas that spawns a garbage truck on input, mocking True Crime. One mission features Ryder, before entering and robbing a house, crying "Yeah, yeah, we gotta do it ninja style.", a coin phrase for the True Crime protagonist, Nick Kang. And in a cemetery in San Fierro, gravestones with "R.I.P. Opposition, 1997-2004" can be seen, as Rockstar implies that San Andreas has "killed" the competition. Luxoflux again referenced GTA and its use of remote controlled vehicles in the GTA III era in True Crime NYC, by having the protagonist, Det. Marcus Reed, say at the start of a mission: "Now I gotta be a cab driver for this fool? Next thing you know I'll be flying remote controlled toys and shit."

When Saints Row 2 was released in 2008, Rockstar did not respond, due to the fact the GTA IV was released months ahead of SR2. THQ did poke fun at GTA, however, as they ran a television commercial that mocked Grand Theft Auto IV of its "useless" features. No controversy became of this, and no actual footage of GTA IV was shown, but the ad did feature the Pricedown font, which is the font used on all GTA logos since GTA III.