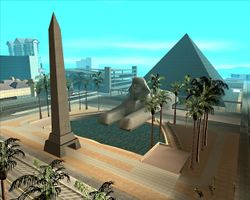 The Camel's Toe is a casino and hotel in Las Venturas, San Andreas. The hotel is a parody of the Luxor Hotel in Las Vegas, including the obelisk tower, the pyramid, and the recreated Sphinx. The name of the casino hotel is derived from "cameltoe", a slang term referring to the profile of a woman's labia majora as a result of wearing tight fitting clothes.

Though it is not possible to enter the casino itself, the player may choose to buy the available a suite for $6000, allowing the player access. The Camel's Toe is situated along The Strip, south of the Royal Casino and north of the Come-A-Lot.

Retrieved from ‘https://www.grandtheftwiki.com/index.php?title=The_Camel%27s_Toe&oldid=363138’
Categories:
Cookies help us deliver our services. By using our services, you agree to our use of cookies.