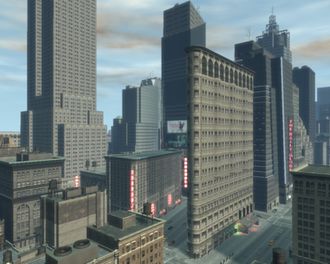 The Triangle, as viewed to the northwest from Lower Easton. The pictured Triangle Building and the lower half of the Rotterdam Tower are both located within The Triangle.

The Triangle is a six-block neighborhood in central Algonquin, named after the area's Triangle Building. The Triangle is located east of the The Meat Quarter, west of Easton, north of Suffolk and south of Star Junction. It is one of the main neighborhoods in Algonquin, with Star Junction, and Middle Park, as it as some of the best places to see and being in the center of Liberty City.

The Triangle's cityscape is no different to that of neighboring Star Junction's, as the area is populated by massive skyscrapers, new and old, to the point the northern edge of The Triangle forms part of the Star Junction intersection area. The Triangle is also home to the Rotterdam Tower, the tallest skyscraper in the city and the whole of the in-game world, and the "Star Junction" LCPD substation is located in The Triangle on the border with Star Junction.

The Triangle is well served by the Liberty City subway system via Easton station and Suffolk, both serving the Algonquin Inner Line and the former additional serving the Algonquin Outer Line. An entrance into Suffolk station is conveniently located in front of the Rotterdam Tower, while the Easton station is accessible via a modernized portal at Burlesque that is embedded into the Daily Globe building.

Retrieved from ‘https://www.grandtheftwiki.com/index.php?title=The_Triangle&oldid=357592’
Category:
Cookies help us deliver our services. By using our services, you agree to our use of cookies.