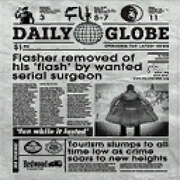 The front page texture of the Daily Globe used on newspapers held by pedestrians in GTA IV. 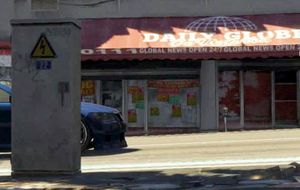 The Daily Globe is a national newspaper in the HD Universe.

The paper appears to be lesser known in GTA IV's setting, even lacking a website (when a similar paper, the Liberty Tree, operates one). Despite its obscurity, passing pedestrians may be depicted holding and reading the newspaper, and the newspaper is implied to be operating in a large, modern skyscraper in The Triangle, Algonquin, which bears both its name and its logo.

A Daily Globe newsagents can be seen in the trailer for GTA V. The Daily Globe building is located in Pillbox Hill on the corner of San Andreas Ave and Las Lagunas Blvd, across the street from the Arcadius Business Center. The paper's stock is traded on the BAWSAQ.

The title of the paper appears to be a reference to the Superman newspaper Daily Planet.

In the mission Editor and Thief, the protagonist is tasked by Martin Madrazo to kill an editor of the Daily Globe and to retrieve incriminating photos of him.

Retrieved from ‘https://www.grandtheftwiki.com/index.php?title=Daily_Globe&oldid=402430’
Categories:
Cookies help us deliver our services. By using our services, you agree to our use of cookies.