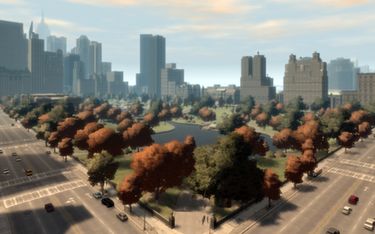 Aerial view of Middle Park towards the southwest.

Middle Park is a park in the GTA IV and GTA Chinatown Wars rendition of Liberty City, situated in the middle of Algonquin. Along with Star Junction and The Triangle, it is one of the main neighborhoods in Algonquin and Liberty City.

Because of its proximity with the aforementioned neighborhoods, the park is an ideal recreational spot for local residents from all sides of the park (ranging from normal visitors to joggers and tai chi practitioners), and additionally serves as a tourist attraction, drawing in tourists to the area. As a result of its popularity, Middle Park is also a venue for street musicians, soapboxxers and homeless people.

Middle Park is the second largest of four large parks in Liberty City, Meadows Park being the largest, and Outlook Park and Welham Parkway being the smallest. Like Central Park, Middle Park is presumed to have been landscaped to seemingly appear natural; the park sports a large lake at the center, and features rockface cliffs at the northern ends of the park, as well as being the ultimate democratic place in the city, for no matter how rich or how poor, you could get dragged into the bushes and raped.

According to the in-game TV documentary, A History of Liberty City, Middle Park was built in the 1850s to "provide a scenic backdrop for junkies to inject shit in their arms and to smoke weed". It was also built for businessmen to have their lunch in, for people to relax, take part in early morning taichi and for people to go "Gay Bashing". 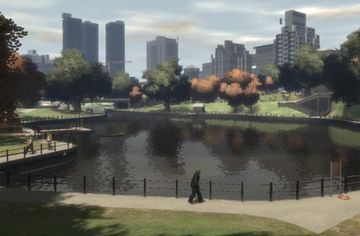 One of Middle Park's primary features: A large lake. The skyline of Lancaster and East Holland can be seen in the distance.

While smaller in land area than Meadows Park, Middle Park boasts a variety of facilities and features matched with those found at Meadows Park. The centerpiece of the park include the lake (with an adjoining lakeside restaurant at the northern end) and a large terraced plaza fronting the lakefront at the southern end. The park also features a small garden at the southern end of the park, and a range of sculptures and statues on the southern half of the park. Other than that, the park offers the usual fare of lush greenspaces and footpaths.

The Libertonian is also situated within the park's boundaries, at the east side facing Columbus Avenue. The building is the only major structure to be located in the park, but is undergoing renovations as of the timeline of GTA IV, in 2008.

Being evidently based on New York City's Central Park, Middle Park is roughly similar to Central Park's design, featuring a heavily vegetated area with a lake being its main feature, but also sporting other prominent landmarks.

The lake that serves as a central facet of the park is similar to Central Park's lake, but also extended further to the north, suggesting that the profile of the Central Park Reservoir was incorporated into the design of Middle Park's lake, resulting in the park featuring a lake that extends from north to south.

The massive plaza fronting the park's lake is based on Central Park's Bethesda Terrace, while The Libertonian's position in Middle Park is similar to the Metropolitan Museum of Art's position in Central Park. Other spoofed landmarks include Central Park's Cleopatra's Needle, replicated in the form of an obelisk to the southeast that features hieroglyphic cravings, and the Maine Monument at Merchant's Gate (the main entrance to Central Park from Columbus Circle), which pylon was partially duplicated but its golden statue on top replaced by an angelic counterpart also used on certain tombstones in Liberty City's cemeteries.

Middle Park is well connected to local subway services, with the aptly named North Park (at Topaz Street), West Park (at Frankfort Avenue) and East Park (at Columbus Avenue) Algonquin Inner Line stations within a short walking distance from the park's boundaries; one portal into East Park station is actually built into the southeastern tip of the park itself. The Quartz West station at the Algonquin Outer Line also serves the park.

Retrieved from ‘https://www.grandtheftwiki.com/index.php?title=Middle_Park&oldid=399101’
Categories:
Cookies help us deliver our services. By using our services, you agree to our use of cookies.