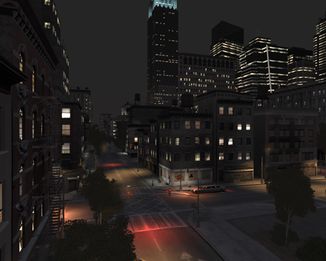 Lower Easton, as viewed to the northeast from Albany Avenue and Feldspar Street. The skyline of The Triangle is visible in the background.

Lower Easton is a neighbourhood seven blocks and a half wide in Algonquin, Liberty City, bordering Easton and Presidents City to the north by Garnet St, Chinatown and Fishmarket South to the south by Emerald St, Little Italy and Suffolk to the west by Columbus Ave and Fishmarket North to the east by Borlock Rd.

Lower Easton is comprised of low-rise apartments and offices that do not generally exceed a height of 10 floors, in contrast to Easton's taller and larger buildings, largely occupy the area.

Few areas of interest may be noted in the district, aside from the LCPD headquarters located in both Lower Easton and neighboring Fishmarket North, being based on One Police Plaza (NYPD headquarters), albiet significantly scaled down. While utilized in real-life as New York City's police headquarters, it remains to be seen if it is meant to serve the same function for the LCPD in the game. Interestingly, a Rusty Brown's Ring Donuts shop in is located just south from the station, across Feldpar Street, where police officers can be seen loitering outside. The building housing the donut shop even features a banner promoting a "Special Police Menu".

As is most lower east side Algonquin districts, Lower Easton has no direct connection to subway lines in the city. The closest stations are situated in neighboring districts: Emerald LTA in Suffolk and Little Italy (the closest to the district), and Easton LTA in Easton.

Retrieved from ‘https://www.grandtheftwiki.com/index.php?title=Lower_Easton&oldid=377966’
Category:
Cookies help us deliver our services. By using our services, you agree to our use of cookies.