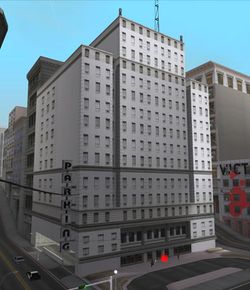 The Valet missions are a series of side missions in Grand Theft Auto: San Andreas. These missions are triggered when Carl Johnson walks into the red marker at the front of the Vank Hoff Hotel in Financial, San Fierro, just north of the Big Pointy Building, when wearing the Valet Uniform. The side mission and uniform are only available after completion of the mission 555 We Tip.

The objective is to collect a hotel patron's vehicle from the front of the hotel (they will drive into the driveway) and drive it round to the underground parking lot. The player will get a bonus for every car in terms of parking the car well and keeping it damage free.

The reward for completing every level is $1000. The Vank Hoff Hotel also becomes an asset, and would generate a maximum of $2000.