The following is a walkthrough of the mission Back Alley Brawl in Grand Theft Auto: Vice City. 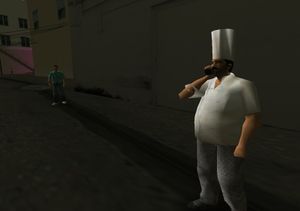 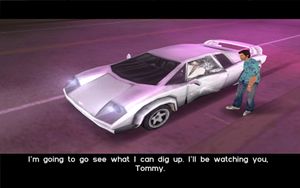 Getting back to your hotel

Meet up with Rosenberg. He wants you to find out more information about the ambushed drug deal. Rosenberg tells you to meet Kent Paul, the biggest rumor guy in the city, at the Malibu Club, where he can usually be found.

After the cutscene with Ken Rosenberg ends, you are given this instruction:

Go to the Malibu Club and find Kent Paul.

Follow the pink blip to the Malibu Club to meet Kent Paul. Walk into the pink marker to start the cutscene.

Go and find the chef on Ocean Drive.

After the cutscene, follow the yellow blip to find the chef in an alleyway on Ocean Drive. He will be marked by a giant pink arrow above him. You will see him talking on a cell phone when you approach him. After the small cutscene plays, when he attacks you, you are introduced to melee combat. Kill the chef. It is possible to kill the chef without ever seeing the cutscene or introduction to melee combat either by driving towards him really fast or using a long-range weapon. When the chef dies, a cell phone pickup is dropped.

Pick up his cell phone.

Picking it up will start another cutscene, introducing you to a new character, Lance Vance. He will introduce you a weapon, the pistol. After the cutscene, three chefs with meat cleavers and knives will attack you. You can either kill them all and risk receiving a wanted level or sprint with Lance towards his car, the Infernus. If you do get a wanted level, a Police Bribe is available along the way. Having Lance killed or his car wrecked will fail the mission.

When you get into his car, follow the gun blip to Ammu-Nation. Once there, a cutscene will introduce you to the store.

Drive back to the hotel.

Return to your hotel by following the pink blip.

Retrieved from ‘https://www.grandtheftwiki.com/index.php?title=Back_Alley_Brawl/Walkthrough&oldid=414726’
Category:
Cookies help us deliver our services. By using our services, you agree to our use of cookies.