The following is a walkthrough of the mission Jury Fury in Grand Theft Auto: Vice City. 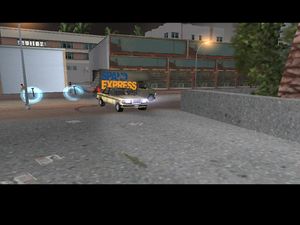 A juror getting into an accident

Drop by Ken's offices in Washington Beach and meet up with Ken. You will be told that the Forelli Family, and in particular Sonny Forelli, is angry that he does not have their money. So, in the meantime, Tommy has to do them a favor. Sonny's cousin, Giorgio, is looking at five years in prison for fraud unless the jury change their mind. He wants you to make them do so.

After the cutscene with Rosenburg ends, another short one shows a person being run over by a Glendale and dropping a Hammer. It is optional to pick it up but it would be useful later in the mission.

Go and intimidate the two jurors, but DON'T kill them!

Two yellow blips appear in the radar, each denoting the two jurors' cars to damage. You can head to either one. A hammer blip appears on the radar noting you that you can buy melee weapons at hardware stores.

If you follow the eastern target, you will see an Admiral and a juror talking to a lady. Do not kill the juror or else you will fail the mission (but you can kill the lady). If you attack the car or juror, the juror will run to his car and attempt to drive off. A cutscene begins, showing the car being hit by a Spand Express truck and dropping two Hammer pickups. This is one of two missions where the Spand Express truck is available. If you have a garage, grab the truck and keep it until the mission is over.

Smash up the Juror's car to get him out!

You are introduced the ability to damage cars using melee weapons. Damage the car by any means to trigger another cutscene showing the juror fleeing. A much quicker method is to damage the driver side door until it falls off and dragging the juror out of his car. The cutscene can be triggered sooner this way.

If you follow the northern target, you will just see a Sentinel by itself.

Smash up the Juror's car!

Damage the car by any means to trigger another cutscene showing the juror fleeing.

Retrieved from ‘https://www.grandtheftwiki.com/index.php?title=Jury_Fury/Walkthrough&oldid=356133’
Category:
Cookies help us deliver our services. By using our services, you agree to our use of cookies.