(Redirected from City of San Andreas)

This article is the city in GTA 1. For the state in GTA San Andreas see San Andreas in GTA III Era.

San Andreas is a city in Grand Theft Auto 1 based on San Francisco, California. The city is unlocked upon completion of the second string of Liberty City missions.

Old world Latin charm and new order Pacific rim technology live happily side by side in San Andreas, the city of the future. San Andreas, which expanded rapidly following the famous 'Fool's Gold Rush' of 1869, has long had ties with the orient. Today, this is reflected in it's thriving oriental communities. As well as Korean and Japanese populations, the city boasts the ninth largest Chinese population in a major city with a two word name anywhere in the world. It has long been rumoured that the Chinese control much of the organised crime on the west coast from a laundry in San Andreas's Chinatown, but no one has ever been able to substantiate these claims, although some have disappeared while trying. Conflicts between Mexican and Chinese communities are common in the area, which also has long been associated with the peace movement. In 1968, hippie students occupied an area to the west of Sunrise, and founded a commune. The dispute with the authorities ended when the Governor sent in a crack team of SWAT operatives, who rapidly ended the confusion. The area has subsequently become known as Soviet Hill. The city of San Andreas grew up around the natural harbour to the south of the modern city. This harbour was formed by the geological fault line which will one day tear San Andreas apart. Seven major earth quakes have rearranged the city, and it sometimes feels as if the people know they are not here to stay. From hippies and Hari Krishna to gangsters and policemen, everyone wants a piece of the action on their own terms in this thriving, 23 hour a day city. - Official GTA 1 website > Cities > San Andreas 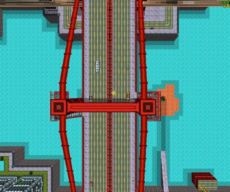 Similar to other cities in GTA 1, San Andreas is designed as a coastal city, although the city lacks adherence to San Francisco's layout of districts, as outlying districts are not accurately placed and the city in entirety faces the wrong direction.

The city is divided into two landmasses, with the northern portion the largest of the two and serving as the city's core, while the southern portion is occupied by a single district, Sunview. The northern landmass is further divided by Aye Valley, which cuts through the heart of the area from the east to the west. The southern coastline of the northern landmass is characterized by its many docks, similar to San Francisco's docks to the north and east of the peninsular.

San Andreas sports distinctive features associated with San Francisco, such as sloped districts, tram lines (which appear only for show), Chinatown and "Soviet Hill" (Russian Hill) districts, Lombard Street, and a large red bridge attempting to emulate the Golden Gate Bridge. Accessible trams, similar to train systems in Liberty City and Vice City, were considered early during the game's development, but was not finalized, possibly explaining the absence of train services in San Andreas.

The city is apparently named after the fault line that runs along the state of California, where San Fransisco is situated.

San Andreas features a total of 17 districts, with 16 located on the northern landmass. The districts are evidently based on real life areas in San Francisco, while their names are plays of those from their real life counterparts:

Retrieved from ‘https://www.grandtheftwiki.com/index.php?title=San_Andreas_in_GTA_1&oldid=363288’
Categories:
Cookies help us deliver our services. By using our services, you agree to our use of cookies.