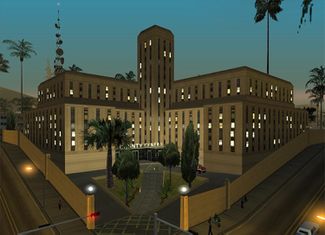 County General Hospital is a hospital in Grand Theft Auto: San Andreas located in Jefferson, Los Santos. It is one of two hospitals in the city, the other being All Saints General Hospital located further west in Market.

The hospital is located in a Ballas controlled area but is also used by the Grove Street Families, Los Santos Vagos, and the Varrios Los Aztecas gangs. Players who die on the eastern half of Los Santos, or die the closest to the hospital are likely to respawn here. The hospital includes a parked Ambulance which can be used to complete Paramedic side missions, and a Gang Tag is located on a wall of the hospital. A sniper rifle can also be found on the hospital roof.

Retrieved from ‘https://www.grandtheftwiki.com/index.php?title=County_General_Hospital&oldid=418444’
Categories:
Cookies help us deliver our services. By using our services, you agree to our use of cookies.