The Ambulance is an emergency vehicle that has appeared in every game in the series, except Grand Theft Auto 2, where it is known as the Medicar. Ambulances are usually found near hospitals and, in Grand Theft Auto III-era games, can be used to start the paramedic sub-mission.

The vehicle is invariably a van or truck-based emergency vehicle featuring red and white lights and sirens and a matching paint scheme (with the exception of GTA 1's Ambulance in Vice City, which features a green-white paint scheme) and complete with it's letters on backwards. Throughout the series the siren sound has varied slightly, as has the design of the vehicle itself. If the player decides to go on a killing spree and many pedestrians are killed, an ambulance will arrive and two paramedics will get out and attempt to revive the wounded. Typically if paramedics are killed it creates more police attention than other civilians.

Ambulances in GTA 1 and GTA III through to GTA Vice City Stories are based on various generations of the Ford E-Series chassis, mainly the third and fourth generations, while the GTA London rendition is based on a European or British model, although given its angle, the vehicle's origins is unknown. Furthermore, the sound of the siren on each vehicle is distinct. Although the Ambulance in GTA IV sports a "Brute" badge on the front, it is clearly a modified version of the Declasse Burrito. Ambulances in GTA V appears mostly identical to its GTA IV rendition with minor cosmetic improvements (such as additional front quarter turn signals and newer light bars), but are also available with different liveries, including a Los Santos Fire Department variant.

The Paramedic side-mission can be toggled on or off when driving the ambulance in all GTA III-era games. This mission requires the player to find, pick up and deliver patients to the hospital within a time limit, while endeavoring to drive as safely as possible (each bump further injures the passengers). With every level comes another patient to deliver, increasing the difficulty. Usually when the player beats level 12 the mission is complete (but can be carried on and replayed later) and a reward is achieved, e.g. infinite sprint or extra health. 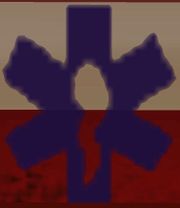 Closeup of the altered Star of Life on the GTA San Andreas Ambulance.

In all its appearances, Ambulances, as mentioned, will be driven towards where multiple pedestrians are killed (by either the player or NPCs). In most games, Ambulances may also be found within hospital ground, which is listed below.

Retrieved from ‘https://www.grandtheftwiki.com/index.php?title=Ambulance&oldid=411110’
Categories:
Cookies help us deliver our services. By using our services, you agree to our use of cookies.