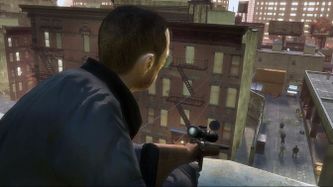 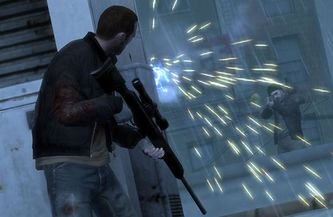 Niko Bellic taking cover behind a wall in GTA IV while wielding a sniper rifle.

A Sniper Rifle is a recurring weapon in the Grand Theft Auto series, having been featured in every Grand Theft Auto game since Grand Theft Auto III with the exception of Grand Theft Auto Advance. It is a special type of rifle that is very accurate and powerful, and can kill targets from long distances. It is often required in missions to shoot enemy gang members at a distance, especially when the goal is to protect an ally from far away. At long range, the sniper rifle usually provides a stealth kill, however it is not silenced, and should be fired far away from pedestrians and police. The rifle's magnifying scope is a valuable reconnaissance tool, and is also useful for viewing small game details like magazine covers and in-car objects.

Like in many computer games, the rifle's bullets fly straight to the targeted point (it is a 'hitscan' weapon) - real life variables like distance, wind, or target movement don't affect the bullet.

The GTA IV Sniper Rifle is said to be twice as powerful as the Combat Sniper rifle; it is, however, a bolt action rifle, and thus can't fire nearly as fast. It provides a one-headshot kill in single player and multiplayer, unless the target is heavily armored.

The sniper rifle only appears in certain missions of Grand Theft Auto: Chinatown Wars, where the player has to assemble the rifle using the touch screen. The whole top screen is then used to display the scoped view. It is modeled after a Sako TRG-42.

In every Grand Theft Auto game in which this rifle has been featured in, the player can only fire the rifle in first-person mode and in bolt action firing mode. However, in the GTA IV Era, if the player is in cover, the player can fire it in third person mode using the crosshair provided. The rifle can also be blindfired. This is a very useful feature, as it can kill targets at a very far distance while staying safe behind cover and maintaining a clear view of the player's surrounds, therefore spotting potential targets to hide from or eliminate first though still has a bolt action fire rate. In GTA IV, during first-person aiming, if the player is standing, there is a noticeable movement of the scope due to Niko Bellic's breathing. This can be minimized by crouching. The Sniper rifle delivers a one-headshot kill in single player and multiplayer, unless the target is armored. It will also kill with about 3 shots to the body. It can easily take down drivers, motorcyclists and, with patience, helicopter pilots.

The Sniper Rifle can be purchased at Ammu-Nation in Los Santos and Blaine County.

Retrieved from ‘https://www.grandtheftwiki.com/index.php?title=Sniper_Rifle&oldid=398720’
Categories:
Cookies help us deliver our services. By using our services, you agree to our use of cookies.