Sweeney General Hospital in GTA III, the respawn point for players who are killed in Portland.

Hospitals are primary locations in the Grand Theft Auto series where the protagonist re-spawns after being wasted. Each hospital services a particular area of the game's map. The fee for hospital service depends on the game. Hospitals also provide health pickups and often have parked ambulances. These Ambulances can be used for Paramedic side missions existing throughout the GTA III era.

Upon death in GTA III, the player is relieved of all their weapons (except on the iOS and Android versions of the game), as well as being charged $1,000 for medical treatment. The system is unchanged in GTA Liberty City Stories, except the cost of each hospital visit follows the same rate set beginning GTA Vice City, at only $100.

Ocean View Hospital in GTA Vice City, which serves as a respawn point for players who die in the southern portion of Vice City Beach.

Starting GTA Vice City, the cost of each visit to a hospital after death is reduced to $100, although the penalty of losing all weapons in hand remains. The system remains largely unchanged in GTA Vice City Stories, but the player has an added option of reclaiming their weapons for $2,000 after they respawn. 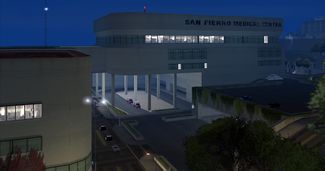 When wasted in Grand Theft Auto: San Andreas one is charged $100 for treatment, regardless how much money you own. The hospital will perform the confiscation of all your weapons, including melee/miscellaneous objects such as Cameras and Spray Cans. This can, however, be prevented when dating Katie Zhan. Dating Katie gives you the power of bribing for your weapons back and also not losing any money.

A thing to note is that, hospitals are not accessible, leaving only the exterior structure exposed. If the map legend is enabled, hospitals will be marked as a distinctive star. At least one hospital is located throughout each city and county in San Andreas. 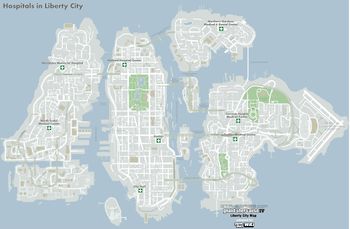 Map of Liberty City in GTA IV pinpointing the locations of hospitals in the game.

Medical costs in GTA IV depend largely on the amount of cash the player carries. If the player has less than $100,000, 10% of the cash in hand is deducted (i.e. if the player has $33,000, $3,300 is taken away, and they are left with $29,700). If the player has over $100,000, the payment is capped at $10,000. Much like the iOS and Android versions of GTA III, the player never loses their weapons even when wasted. GTA IV is the first of the games to have accessible hospitals, allowing players to explore the interior. When playing GTA IV Free Mode, in Multiplayer, one does not re-spawn at a designated hospital, they only re-spawn at an active area or place designated by session host.

This system carries over to the next game.

Retrieved from ‘https://www.grandtheftwiki.com/index.php?title=Hospitals&oldid=415300’
Categories:
Cookies help us deliver our services. By using our services, you agree to our use of cookies.