For ghost towns in the San Andreas in the 3D Universe, see Las Brujas or Aldea Malvada. 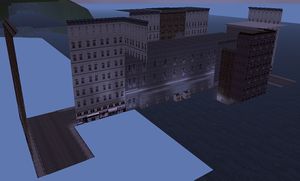 In-game view of the "Ghost Town"

The "Ghost Town" is an area in Liberty City in Grand Theft Auto III not intended to be accessible during normal gameplay. It is used in the introduction of GTA III, in which Claude helps Catalina rob the Bank of Liberty, is betrayed, and shot. The name of the area was coined by fans due to the inaccessibility and non-solid property of the area. The area is sometimes mistakenly associated to Carcer City, however in a Q&A with Rockstar Games, it was stated that "Ghost Town" is actually just a part of Liberty City, since the islands shown in Grand Theft Auto III are only some of Liberty City as a whole.

The "Ghost Town" area is located beneath the northern side of the Shoreside Vale hills. The area is normally inaccessible but can be accessed by flying a Dodo or through the use of cheats. The majority of the area is not solid, except for a few cardboard boxes and light fixtures, so it is impossible to explore the area deeply without the use of trainers or modifications. The area does not exist in the Grand Theft Auto: Liberty City Stories rendition of Liberty City.

The area contains a Liberty City Bank, some stores, apartments, and a Mr. Wongs, an Esperanto, and three Securicars parked on one street. The area is noticeably more detailed than most of Liberty City; the alley behind the bank contains dumpsters, cardboard boxes, and various items of garbage strewn across the ground. Most of the apartments above the alley and street also feature air conditioning units on the windows. The sidewalks have a few street lights and parking signs.

Retrieved from ‘https://www.grandtheftwiki.com/index.php?title=Ghost_Town&oldid=400184’
Categories:
Cookies help us deliver our services. By using our services, you agree to our use of cookies.