For the character in Grand Theft Auto 2, see Dodo (GTA 2). 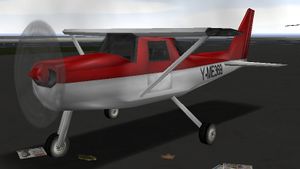 A Dodo in GTA III.

In general, the GTA III rendition has short, stubby wings that appear to have been sawed off at the mid-point in order to make it virtually impossible to fly (hence the name, Dodo), while the GTA San Andreas rendition features a complete wing span. It strongly resembles an older Cessna 152, and is always painted red and white. The Dodo, with or without wings, behaves the same on ground - the faster its propeller spins, more unstable it is.

Winged Dodos are seen flying around in both Liberty City and Vice City, often towing fliers in the latter case. They can be shot down with rockets (either with a weapon or the Hunter), earning the player an instant 3-star wanted level.

As the GTA III rendition of the controllable Dodo evidently features shorter wings, the plane is considerably difficult to control; often, a normal pitch or roll may send the plane plummeting out of control, and the thrust of the engine alone cannot be relied on to aid in lift. According to Rockstar Games themselves, the Dodo wasn't meant to be properly flown.[1] The Dodo is thus intended to only remain in the air for short periods of time, but it is possible for the plane to continuously stay airborne through specific techniques.

Takeoff alone requires an unorthodox method of "sling-shotting" the aircraft upwards using the suspension of the plane's front landing gear by performing the following:

The Dodo will continuously be in phugoid when in flight. After flying a certain distance, the Dodo is expected to pitch downwards, but will soon pitch upwards again after gaining momentum and lift from the fall, repeating the same drop-rise sequence over again. From takeoff onwards, the player must be wary of the pitch of the plane, doing their best to level the Dodo to ensure the plane does not ascend or descend too quickly, as it will result in more violent fluctuations in flight and increases the risk of crashing. Rolling (steering) of the Dodo must also be done with care by softly tapping the directional controls of the plane instead of holding them, which results in violent rolling and leading to the plane dropping from the sky.

If controlled properly, the Dodo can reach great heights, even flying over skyscrapers (see this video). The Dodo may also be used to reach inaccessible parts of the city, such as the Ghost Town, or the Easter egg text on the edge of the radar's map.

Driven on the ground, the Dodo is equally hard to navigate due to a wide turning radius. Braking at high speeds is understandably poor, comparable to the Esperanto; using the handbrake usually reduces the braking distance by half. 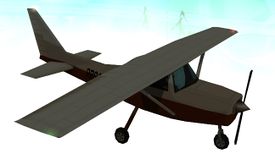 A Dodo in flight in GTA San Andreas.

The Dodo in GTA San Andreas, with a complete wing span and full functionality, has far greater stability and control, and has an engine far more reliable in keeping the plane airborne (using Flying School methods, rather than the GTA III method). However, with a range of superior aircraft available in the game, the Dodo remains an undesirable option, being one of the slowest and most underpowered planes in game, although it is still considerably maneuverable. The Dodo is not seen flown by NPCs in the skies in GTA San Andreas.

The Dodo in GTA Liberty City Stories retains the same model from GTA III but is only obtainable through third-party modifications. However, it has no acceleration and therefore is useless, as it never moves, unless if the player uses a CheatDevice.

In GTA San Andreas, during the mission "Freefall" the player must fly a Dodo above and behind a Shamal jet in which some Forelli hitmen are being transported, to do a hit for Salvatore Leone.

The "Y-ME" prefix on the Dodo's registration number, GTA III.

Retrieved from ‘https://www.grandtheftwiki.com/index.php?title=Dodo&oldid=412623’
Categories:
Cookies help us deliver our services. By using our services, you agree to our use of cookies.