With steep elevation changes, a river dividing the main residential area from the industrial estate and the airport, and roads, bridges and tunnels criss-crossing each other at different elevations, Shoreside Vale is notoriously tricky to navigate. For this reason, Shoreside Vale is a very poor choice for the vehicle missions.

Shoreside Vale is mainly based of New Jersey, that resembles more to the neighborhoods in west and northwest of the island as Pike Creek, which is a clear reference to the industrial districts of Elizabeth and Bayonne, like the Cochrane Dam based on the rivers and green areas of Bayonne. While the northern part of the island resembles the upper classes in Westchester and Long Island in the residential area of Cedar Grove, as well as similarities to The Bronx in Wichita Gardens projects, with little references to Queens.

A computer generation of Shoreside Vale.

Cedar Grove is an upper-class suburban area which takes its name directly from a New Jersey suburb. It is controlled by the Colombian Cartel, and is home to some of the more wealthy residents of Liberty City. It consists of lavish mansions with swimming pools and fast sports cars on the drive-ways. Donald Love's mansion (later taken over by Catalina and the Colombian Cartel) and one of Toni Cipriani's safehouses in Grand Theft Auto: Liberty City Stories also lie within this area.

Cochrane Dam is a hydro-electric dam and also serves as a bridge linking eastern and northern Shoreside Vale.

Francis International Airport is Liberty City's airport situated on the southern half of Shoreside Vale, and just off the main road coming from Staunton Island. Other features in this area include a long-term parking lot, a fire station and a subway station.

Pike Creek is a business district located in the western section of Shoreside Vale. It is home to the offices of several businesses, including Punk Noodles, Turtle Head Fishing Co., AmCo, and Liberty Pharmaceuticals. Services include the local police station, the hospital, Pay 'n' Spray and 8-Ball's bomb shop. Pike Creek is Yakuza turf in 1998 in GTA Liberty City Stories, but is occupied by no gang in 2001, the setting GTA III (although it does have Yakuza presence during one mission).

Wichita Gardens is a low-wealth residential area, mainly composed of housing projects. It was formerly controlled by the Forelli Family, but it is now controlled by the Southside Hoods, thanks to Toni Cipriani's help. It is also home to one of Claude's hideout. 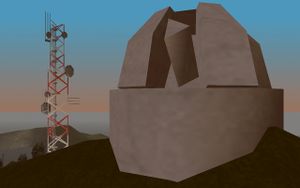 The Cedar Ridge Observatory, a very important point of interest in Shoreside Vale

Retrieved from ‘https://www.grandtheftwiki.com/index.php?title=Shoreside_Vale&oldid=417042’
Categories:
Cookies help us deliver our services. By using our services, you agree to our use of cookies.