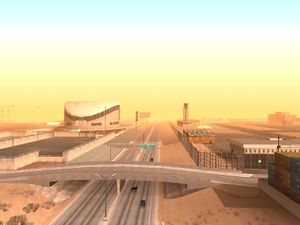 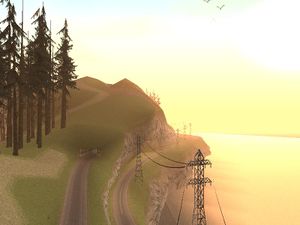 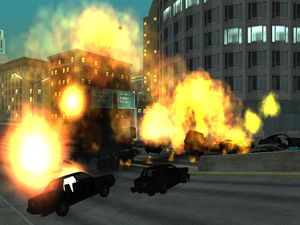 Highways are large main roads with multiple lanes, encircling or connecting cities in various GTA games. They become particularly relevant in the large-scale multiple-city game, Grand Theft Auto: San Andreas. While many highways remain unnamed, some are given specific designations, such as in GTA San Andreas.

In general, highways are interconnected, and provide smooth transitions from one region of the map to another without stopping. However, some highways are limited in their service and in the intersections they make with other major roads, and may not provide a more rapid alternative to smaller roads. Main local arteries are generally easier and more direct for in-city travel, but highways are quicker for inter-city travel.

Most highways provide a much more rapid pace and more lanes than small roads, allowing for greater speeds and more room for maneuvering. However, cars often switch lanes quickly without notice, and this can present a hazard for the player if traveling at high speeds. Almost any crash on a highway will cause cars to crash into the rear of the stopped vehicles, and particularly in GTA San Andreas this can trigger a chain reaction of explosions, especially in Las Venturas, where cars reach extreme speeds because the highways there consist of long straight stretches. This also poses a high risk of being rear-ended. Sometimes, even if the player is driving normally, there is still a good chance of crashing. Locations to be careful while driving are the Mulholland Intersection, around the LSX, the Julius Thruway, and much of the Santa Maria Freeway Extension. Speeds are high around these roads, so be careful.

Another hazard is that one will often times come across slower moving vehicles in certain places. These vehicles include the the Tractor, Freeway, Sanchez, and other motorcycles. Also, the max speed periodically changes without notice on most highways and the the other cars will slow down usually causing an unaware player to rear end them. Sometimes, the driver in the car you hit will get out and start attacking you or your vehicle with a Shovel, Baseball Bat, Golf Club, or simply bare-handed.