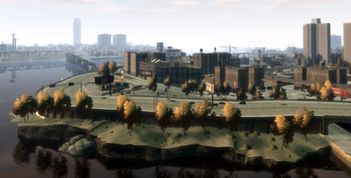 Little Bay as viewed to the southwest.

Little Bay is a neighborhood in northern Bohan, Liberty City. It is bordered to the southeast, east and to the northeast unnamed body of water; to the north by Planche Street and to the west by Coxsack Avenue (Northern Gardens); to the south by the Dukes Bay Bridge and the Northern Expressway (Bohan Industrial). Little Bay is also a heavily influenced Albanians hangout, making it a small but dangerous territory.

Little Bay is a primarily residential neighborhood. Its housing consists almost exclusively of small, seven-story apartment blocks with a few duplexes and townhouses in its northwestern corner.

Much like the other northern Bohan neighborhoods, Little Bay is separated into two areas: its residential sectors to the south and its public parkland along the northern Bohan coastline. However, unlike Boulevard and Northern Gardens, Little Bay's coastline is virtually inaccessible (save for a small portion of it flanking Downrock Loop between Flanger Street and the Northern Expressway). A ridge separates the residential areas of northern Bohan from the coastline; at this point along the Northern Expressway, it is located directly on the edge of this ridge (as opposed to a distance away as is the case in points west). Additionally, the expressway essentially becomes a full-fledged freeway while passing through the neighborhood (there is only one stop light), so there is no convenient, safe access to the coastline; furthermore, the sole access to the coastline is via a parking lot at the northern point of the border with Northern Gardens. However, access to the coast from this location seems to have been unintended, as, unlike the Northern Gardens side of the parking lot, there is no formal access to it (i.e. no staircases or walkways).

Little Bay can be viewed as an amalgamation of Pelham Bay and Throggs Neck, neighborhoods in eastern Bronx, New York.

The Liberty City Subway does not provide service to Little Bay. The Windmill Street station is the closest to the neighborhood, but given that it is several blocks from the "closest" part of Little Bay, it is not at all convenient to use the station. Residents would probably feel more inclined to simply drive to the other boroughs using the Dukes Bay Bridge, which terminates in the neighborhood.

Retrieved from ‘https://www.grandtheftwiki.com/index.php?title=Little_Bay&oldid=370382’
Category:
Cookies help us deliver our services. By using our services, you agree to our use of cookies.