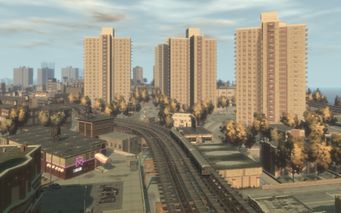 South Bohan as seen to the northwest from Little Bay. The Triangle Club is visible to the lower left.

Northern Gardens is a large neighborhood in northern Bohan, Liberty City. It is bordered to the northeast and to the north by an unnamed body of water; to the west by Greene Avenue (Boulevard); to the southwest by Lompoc Avenue, to the south by Leavenworth Avenue, and to the southeast by the Northern Expressway (Bohan Industrial); and to the east by Coxsack Avenue (Little Bay).

Northern Gardens is primarily an urban, residential neighborhood. The part of the neighborhood east of Altona Avenue (which almost constitutes its entirety) contains high-rise apartments as its exclusive housing stock, whereas smaller apartments, townhouses, and duplexes can be found near the Little Bay border. It is arguably the most lively of the northern Bohan neighborhoods, claiming almost every public attraction to be found in this part of the borough.

The Northern Expressway bisects the neighborhood, separating its residential southern half from its northern half, which consists only of uninhabited, undeveloped public land and a beach at sea level, cut off from the rest of the borough by a high ridge that runs along northern Bohan (the same ridge that separates Boulevard from its coastline).

Northern Gardens is prized for its amazing views of the body of water to the north, described in the official game map as "one of the most tranquil and picturesque shorelines in the whole of Liberty City." Indeed, the neighborhood's (partial) position at the end of the aforementioned ridge makes it a popular destination for Bohan residents wishing to escape the hustle and bustle of the gritty neighborhoods to the south.

Southern Northern Gardens appears to have been influenced by the Bronx, New York neighborhood of Co-op City, while its northern half seems to borrow elements from Pelham Bay Park.

Speaking strictly of public facilities, Northern Gardens houses a police precinct at the intersection of the Northern Expressway and Leavenworth Avenue, directly underneath the elevated train tracks. Bohan Medical & Dental Center is also located in the neighborhood further south on Leavenworth Avenue (at the point where Leavenworth transforms from a straight north-south street to a northwest-southeast running road). Finally, Bohan's fire station is located at the intersection of Bronco Street and Caterpillar Street.

Northern Gardens is also the site of one of Liberty City's adult entertainment establishments, The Triangle Club. It is located at the intersection of Drill Street and Leavenworth Avenue.

The Liberty City Subway does not serve Northern Gardens. The Windmill Street station is the closest to the neighborhood; however, it is located quite a distance from the neighborhood's southeast corner. Residents of Northern Gardens wishing to use the station are required to make a trip through a neighborhood (Bohan Industrial) to reach it, making it much more of a hassle than its worth to use it.

Retrieved from ‘https://www.grandtheftwiki.com/index.php?title=Northern_Gardens&oldid=379630’
Category:
Cookies help us deliver our services. By using our services, you agree to our use of cookies.