The Dukes Bay Bridge in GTA IV, as viewed towards Bohan.

The bridge is one of the more minor in the city (at least in terms of missions), but still remains popular among locals as it provides a valuable, fast and convenient means of transportation between the two boroughs, and additionally allows car users to avoid having to use the busier East Borough Bridge to travel between Dukes and Bohan. However, the bridge features toll barriers at the Dukes end, and a toll charge of $5 is required for travel. The East Borough Bridge and the Dukes Bay Bridge are the only two bridges in the Liberty City Metropolitan area that require a toll payment to use. Dukes Bay Bridge is subject to much traffic congestion due to its two-lane structure, there is only one lane for each direction of travel.

It is based off of the Throgs Neck Bridge in New York City due to location, yet does not bear any resemblance to the real bridge. 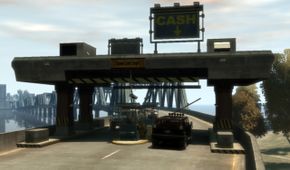 The Dukes Bay Bridge tollbooth, one of only two bridge-based tollbooths in Liberty City.

The Dukes Bay Bridge begins in eastern Bohan in the district of Little Bay. The bridge is accessed by driving along Sing Sing avenue, which leads into a steep downward incline as the road underpasses the Northern Expressway above. Upon reaching the other-side of this underpass, drivers will reach the coast-line and the beginning of the Dukes Bay Bridge. At the other (Dukes) end of the bridge, a toll barrier is reached and subsequent to paying, users are then able to turn left or right onto Dukes Drive in the Steinway district of Dukes.

Due to the fact there is little of interest in east Bohan from a GTA IV mission perspective, the in-game GPS more often guides Niko across the East Borough Bridge when travelling from Broker/Dukes to Bohan during missions, making it one of the lesser-used bridges in the game.

In addition, the bridge's toll plaza may play a role in the Lost and Damned mission Roman's Holiday, depending on how the mission is played.

Retrieved from ‘https://www.grandtheftwiki.com/index.php?title=Dukes_Bay_Bridge&oldid=375869’
Categories:
Cookies help us deliver our services. By using our services, you agree to our use of cookies.