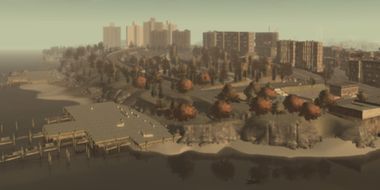 Boulevard, as viewed to the southeast.

Boulevard is a large neighborhood in northern Bohan, Liberty City. It is bordered to the north and to the west by an unnamed body of water; to the southwest by Grand Boulevard (Fortside); and to the east by Greene Avenue (Bohan Industrial and Northern Gardens).

Boulevard is Liberty City's northernmost neighborhood and it revives it's name from Grand Boulevard; a major thoroughfare.

Boulevard can best be classified as a residential neighborhood; however, despite its vast size, living spaces exist only along the southern border on Grand Boulevard, real life's Grand Concourse. This can be attributed to the fact that more than half of its total area is taken up by a large lake surrounded by greenspace and recreational areas (dubbed Welham Park) in the heart of the neighborhood, as well as the long-stretching northern Bohan coastline, separated from the rest of the borough by a high ridge. Boulevard is likely to be based off of a combination of northern neighborhoods in Bronx such as Morris Park, Pelhman Parkway, Wakefield, City Island, and Van Cortlandt, Bronx and Pelham Bay Park.

The neighborhood may have been a port in former years, as suggested by the existence of several abandoned piers along the northern coast.

The Liberty City Subway does not serve Boulevard; however, a station is located in neighboring Fortside, not too far from the Boulevard-Fortside border. Boulevard is also the easternmost terminating point of the Northwood Heights Bridge that connects Bohan to Northwood, Algonquin. The bridge is linked to Grand Boulevard.

Retrieved from ‘https://www.grandtheftwiki.com/index.php?title=Boulevard&oldid=370380’
Category:
Cookies help us deliver our services. By using our services, you agree to our use of cookies.